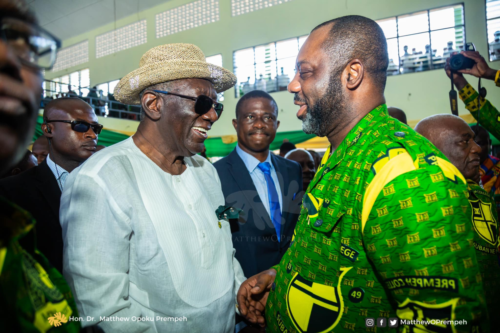 Minister of Energy, Dr. Mathew Opoku Prempeh has described former President John Agyekum Kufuor as a source of inspiration to many.

On the occasion of the 84th birthday of the man many prefer to call the Gentle Giant, the lawmaker indicates that he is a mentor of leadership.

The Minister and Member of Parliament for Manhyia South Constituency indicate that his tenure as President from 2001 to 2008, witnessed several positive, life-changing pro-poor policies in this country.

According to him, President Kufuor was very instrumental in bringing back the UP tradition that had been exiled in political wilderness and led them to win power in 2000, wishing him long life and prosperity.

“His Excellency Former President John Agyekum Kufuor, or the ‘Gentle Giant’, as many affectionately call him, has been a source of inspiration to many, on what leadership is and should be about. In 2001, he led the NPP to power after decades of the UP tradition’s exile in the political wilderness, and his tenure as President saw several positive, life-changing pro-poor policies in this country.

Papa, on your 84th birthday, I wish you many more years of the Lord’s abundant blessings and grace. May He continue to grant you your heart’s desires, and may you continue to guide inspire generations. Happy birthday!”, he wrote