Breaking News
Home / News / Your name is Fati not Celestina and your father is a watchman — NPP youth in FB beef, Salam cited

Your name is Fati not Celestina and your father is a watchman — NPP youth in FB beef, Salam cited 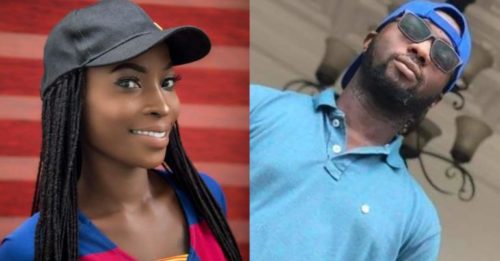 According to reports, one Celestina Abena Henewaa Amoako-Atta known called out a colleague communicator, one Atick Yakubu as “a gossip” in Twi under another party member’s post.

The description of the said Yakubu by Celestina Abena Henewaa Amoako-Atta did not go down with the former.

In reply, the said Yakubu included the background of his problem with the said Celestina Amoako-Atta including their chats records.

The chats revealed the two had a disagreement in their inbox over the NPP Youth Election won by Mustapha Salam who had made attempts to meet Celestina Abena Henewaa Amoako-Atta to resolve her problem with him.

The said Celestina Abena did not support Salam while Yakubu did.

The said Yakubu in his reply revealed Celestina who is popular on social media is actually known as Fati from the North and her father is a watchman contrary to claims of being allegedly related to Asante Bediatuo.

Following the beef, MyNewsGh.com sources indicate elders have intervened over the matter.

Gm , Celestina Abena Henewaa Amoako-Atta , ordinarily , I do not reply my juniors and people my little brother is older than in kind . That’s not my style . You know , class is not money but attitude and when it comes to attitude am richer than Elon Musk . But I chose this medium because it seems you have fooled for soo long and no one seem to mind you for whichever reason . Maybe it could be you have sworn an affidavit to change your name from Fati whatever horrible surname you were given to “Amoako-Atta “ to gain some validation. I understand your pain but in this life eeeh accept who you are and no one can use it against you . When I call people on phone , I introduce myself as “Atick Yakubu “ . That’s confidence , that’s high self-esteem. As a northerner , you gotta be proud of where you come from . After all Mahamdu Bawumia is the veep and and even the southerners think his name is sexy . If Mahamudu is sexy , how much more “Fati “ . Embrace who you are . That’s the beginning of having a high self esteem. This is free therapy. I will help you with your other psychological problems later . And that’s also for free . Am doing this for free cos no matter what , you are our northern sister . No matter what you are now or trying to be I got your back sis .

Nonetheless, am proud of what you were able to achieve this with ”Celestina Amoako-Atta “ . At least you had a scholarship to go study abroad from the people whom your father used to be a “watchman “ for . They have done well . At least as daughter of a watchman, your inheritance would have been a mat , a torchlight and buta “ and maybe a little bottle for “pito “ but you have made a good deal with this . At least all the nights daddy was bitten by mosquitoes didn’t go in vain . My only disappointment is that you came back with too much piercings and tattoo than 2pac shakur. I pray you never get that money you pray soo much for to go do that liposuction on your tinny ass . Aside me wanting to lose a northern sister , I think an ass won’t be look good on you . You look like a tripod stand with your lanky legs and that will be a disgusting sight for some of us . On behalf of all men who love thick , we banish you from having ass in the name of Jesus. Again since you are good with name changes you can as well add 2pac to your name . His inspiration for tattoos and piercings can’t go unnoticed.

Enough of the introduction. Now let me get to the topic . I woke up to see my little northern sister insulting me on a post someone made on me . Soo this is the genesis of the issue . During the NYO contest , I noticed she was throwing shades at Salam . I had some reservations in relation to Mercedes I personally called Mercy and foster cos we go way back . She told me her comments and posts were taken out of context . I respectfully went with her narrative. She’s among those who worked soo hard for the party in opposition unlike Fati who came from nowhere , called my line and introduced herself as whoever and wanted my support for a position she was running for . I knew she wouldn’t win but then I opened the channel of communication with her . She eventually lost , she tried getting closer and by posting my pics with some “am cool “ with you captions when we weren’t that cool . Like some “ahohy3hy3 vibes . At a point I had to send her a message to delete a post she once made and she unfriended me and sent another request months later . I wasn’t definitely going to roll with someone who seem to begging for attention. That “fake it till you make it “ life is not my kind . It’s the first stage of mental sickness.

Back to the topic , I called Salam and I asked him if he had reached out to Mercy and Celestina. Mercy was needed but it’s politics soo you have to manage everyone even with those who are think they mattered like Celestina. I don’t know how Salam managed it with the lady and the girl . But eventually I reached out to Fati to ask her what’s up ? I still have my chats with her . All of a sudden she assumed the position of seemingly relevance like I had reported her and blah blah and I have put her in trouble etc . In fact I was confused soo the usual me was plain with her . I told her she didn’t have anything to add to the election and it came out of the fact that she said something whoever she threw her support for will be the next NYO or so and I was like who do you think you are ? You have no idea of how Youth elections are run , you don’t have money to influence things , you don’t have any influence .

The next thing I realized is she unfriended me cos probably she was soo fighting for the relevance and self importance and I rubbished her . I was just being me . On that issue if my little Northern sister Fati felt insulted, I apologize though I was stating the obvious which became evident. I never engaged her for all those time till today when she went to write this comment about me .

Now let me make something clear to you . Look , me eeh I can fight . You have no idea what you are dealing with here . Am not a beast . My creation is still not defined . Whichever angle you take this too I will beat you to it .

It’s kinda uncomfortable taking on a little girl . I deal with cats but not just any cat but lions , tigers , leopards and cheetahs not Domesticated cats . It’s soo uncomfortable but I gotta put you where you belong . Nothing pains me more than using my data on someone like you but trust me you will pay for it . Aside my dear Hon Cos Premanii whom I have signed a perpetual bond to fight with and make up I do not engage ladies but take note , the word I used was “ladies “ . below is the chats between she and I that led to this nonsense this morning.

And those close to her should talk to her . She won’t like it when I place her in my red book . And am also not amongst those who she bullies on Facebook . In fact not even those she has adopted their name can bully me . Tweeea Kai