Breaking News
Home / News / Your direction, guidance have been invaluable to me – Bawumia celebrates Kufuor

Your direction, guidance have been invaluable to me – Bawumia celebrates Kufuor 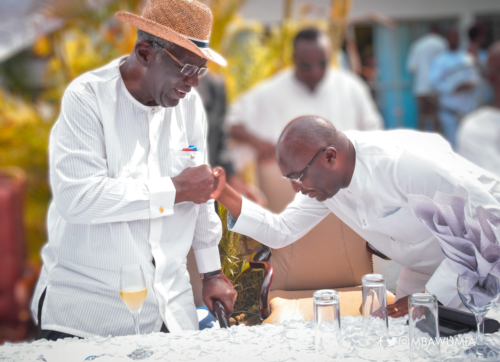 Vice President Dr. Mahamudu Bawumia has celebrated his political godfather and former President of Ghana, John Agyekum Kufuor on the occasion of his 84th birthday.

He acknowledges the invaluable guidance and direction of the man who has severally openly acknowledged the Vice President is his son.

In a post on his official Facebook Dr. Bawumia wrote “Happy Birthday to former President of the Republic of Ghana, H.E. John Agyekum Kufuor. Papa, your direction and guidance have been invaluable to me in my personal as well as political life. I am forever thankful for knowing you. Your service to mother Ghana will never be forgotten.  May God continue to give you good health and long life to keep impacting humanity”

According to the former President, Dr. Mahamudu Bawumia who served as a Deputy Governor of the Bank of Ghana under his administration, has been a loyal son to him and his course since he got to know him.

“Let me single out one person, he is also a father but I can claim that he happens to be my son too and that’s the Vice President sitting right by me. In your narration, you said when the planners decided to invite the Vice President, you learnt he had gone to the North for some duties and you even doubted whether he will manage to come.

But you phoned him and with his signature giggling he said if it’s J.A. Kufour I’m coming. That’s so touching, very touching but probably that’s how a son should behave towards a father. Sheer coincidence but you may not know that I started being a father in 1963 and that happen to be the year the Vice President was born.

My son whose birthday falls on September that year could not make it to this event but I believe he came on October 7 and my son was on September 6, October 7 this guy here popped out and then we’ve related so beautifully. It’s not just for this occasion but once I noticed him, he became like a son. He is a true son, very loyal. So when I heard the narration that when you phoned him he said if it’s Kufour I’m coming, I pray for the Vice President, May God bless him” he said.