Breaking News
Home / Politics / You and Sam George are ‘Small Boys’; I was MCE when you wrote WASSCE — Pablo to Sammy Gyamfi

You and Sam George are ‘Small Boys’; I was MCE when you wrote WASSCE — Pablo to Sammy Gyamfi 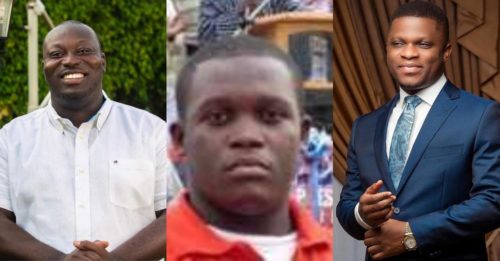 George Opare Addo Pablo National Youth Organizer elect of the NDC has revealed Sam George was his small boy when he run for the Okere Parliamentary seat at the age of 25.

Mr. Opare Addo also disclosed that at a time he was serving as Municipal Chief Executive for Akwapem North, Sammy Gyamfi who is National Communications Officer of the party was writing his West African Secondary School  Certificate Exams WASSCE.

He was speaking to Mugabe Maase on Power FM monitored by MyNewsGh.com.

“Sammy Gyamfi he is flying too high. He should come down, he is a small boy. He has not lived life more than me” George Opare Addo slammed his fellow NDC executive.

On Sam George, he said:

I contested that small boy

According to Opare Addo, his main opponent was Sammy Gyamfi not Brogya Genfi. He said he is pleased he defeated Sammy Gyamfi.

I called him twice for us to meet at my Dzorwulu office, ask him. He was at peace FM. I called him to come for us to sit and talk so that we can work together. So what is my crime?” Opare Addo revealed.

“I told him (Sammy Gyamfi) that the situation where he passes the other way when I pass one way will not help the party and I want is to work together to bring NDC to power, ask him if I am lying” Opare Addo revealed.

“Oh he is a small boy, that is a fact, I don’t compete with him for anything, he is not my level. I own companies and.employ people I pay every month. Ask that small boy, doesn’t he live at Airport Hills? How did he build that?…” George Opare Addo was quickly shut down by Mugabe Maase before he could continue further.

Tags You and Sam George are ‘Small Boys’; I was MCE when you wrote WASSCE — Pablo to Sammy Gyamfi

Previous My focus is winning election 2024 not your party positions – Mahama tells NDC aspirants
Next To God be the glory! – Ofori-Atta exclaims as IMF announces deal