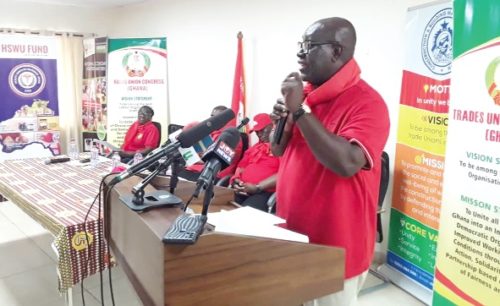 The Trades Union Congress (TUC) has stated that its members will not participate in the Debt Exchange Programme announced by the government to deal with the country’s economic crisis.

The 500,000-member union said workers would not be part of a programme that would worsen their plight and further plunge them into unimaginable hardship.

At a press conference in Accra yesterday, the Secretary General of the TUC, Dr Yaw Baah, said: “ The TUC and all our affiliates have decided that the pension funds of our members will not be part of the Debt Exchange Programme.”

He said the TUC had written to the Minister of Finance, Ken Ofori-Atta, on its position.

“Within one week, government should ensure that all pension funds including SSNIT funds be exempted,” he said.

He served notice that “If government refuses to accede to our demand, we will advise ourselves.”

Dr Baah stated that the union was ready to go all out to defend its stance and protect the interest of workers.

“All workers must be ready to participate fully in any industrial action to protect our pension funds. Workers will no longer bear the consequences of any IMF-inspired or IMF-sponsored policies and programmes.

“Government is responsible for its decisions, including the decision to seek an IMF bailout,” Dr Baah said.

The press conference, held at the TUC headquarters, was attended by members of the 23 labour unions that make up the TUC.

It was a charged atmosphere as the members, clad in red attire, sang union songs, clinching their fists to express their displeasure about the programme.

“Do not touch our pensions, no haircuts on our pensions” was the rallying cry that reverberated through the packed conference room of the TUC.

The Minister of Finance announced that the government would implement a voluntary debt exchange programme as part of measures to reduce the debt burden and give the government some breathing space to deal with the fiscal challenges facing the country.

With the programme, domestic bondholders face steep interest rate cuts and lengthening of tenure on their investments.

In addition, domestic debt investors will be asked to exchange their existing securities for new ones that may offer a zero coupon in the first year, five per cent in the second and 10 per cent in the third year.

Besides, holders of short-term debt securities, comprising Treasury-Bills of 91-Days, 182-Days and 364-Days treasury notes will, however, be excluded from the debt exchange programme.

Dr Baah said with pension funds holding a chunk of the government’s bonds, it was untenable that the government had failed to take into consideration the negative implications of the DEP on workers.

Again, he described as unacceptable the government’s failure to engage with labour unions on such a policy which had grave consequences on the retirement incomes of workers.

“We will do everything in our power to ensure that workers are fully protected and not even a pesewa is lost in the Debt Exchange Programme,” he stated.

The TUC General Secretary also criticised initiatives captured in the 2023 budget such as the freeze on public sector employment and a cap on salaries of state-owned enterprises (SOEs).

Dr Baah said employment must be at the heart of economic recovery and, therefore, freezing employment in the public sector would increase the pain and suffering of the people.

“To close the public sector to new entrants is a stab in the back of young Ghanaians, who have been educated at great costs to their families and to the nation,” he said, and quizzed, “What is the point of free SHS if graduates cannot secure jobs?”

Capping salaries of SOEs, he said, was not the way to go, but rather the government should raise the salaries of workers on the single spine structure to match those of SOEs.

“The surge in inflation has completely eroded the purchasing power of workers, especially those in the public sector. The value of the cost-of-living allowance (COLA) granted in July 2022 has been completely wiped out,” Dr Baah said.