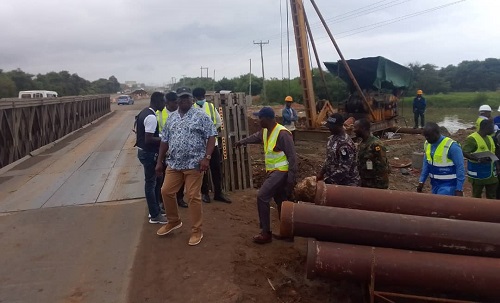 Re-construction works has commenced on the Baily Bridge over the Kpeshie Lagoon in Accra.

The work being undertaken by China Gansu International Construction Company is expected to be completed by December 15, 2022.

It forms part of the 16-kilometre Tema-Accra Beach road project under construction.

This came to light when the Minister of Roads and Highways, Mr Kwasi Amoako-Atta, inspected some road projects currently being undertaken in the Greater Accra Region.

He was accompanied by the Chief Director of the Ministry, Alhaji Dr, Awullo Abass, and other directors of Urban Roads, Feeder Roads and the Ghana Highway Authority.

The Resident Engineer, Mr Kwaku Diafo, briefing the minister and his team said the steel metal bridge would be replaced with a concrete one and would be completed within schedule.

The Director of the Urban Roads (DUR,) Mr Amoo Gottfried, told the minister that adequate security measures had been put in place for effective traffic management to give the contractor that free hand to work.

He indicated that two lanes from Teshie to Accra would be opened to motorists in the morning for easy flow of traffic, while the two Accra Teshie lanes would also be opened for traffic in the evenings.

The director said the critical nature of that portion of the road made it imperative that every possible effort would be made to ensure that the road diversions did not add to the frustrations of motorists.

Mr Amoako-Attah after the interactions said commuters had to endure a lot of inconvenience as a result of the heavy traffic on that route, and appealed to the public to bear with the contractor while efforts were being made to fix the bridge.

He urged the contractor to work day and night to complete the work before the yuletide, so that the entire stretch of the Tema-Accra beach road would be completed by April next year.

The minister commended the Motor Traffic and Transport Division of the Ghana Police Service for providing adequate security at the site and ensuring that motorists adhered to the approved designated routes.

The DUR on September 7 issued a public notice on the closure of the Kpeshie Bridge near the Labadi Beach Hotel on the La Beach road in Accra for Three months.

This was due to the construction of the new two to three lane bridge over the Kpeshie Lagoon.

The statement advised motorists to follow traffic regulations that would be placed at vantage points to avoid inconveniencing other motorists.