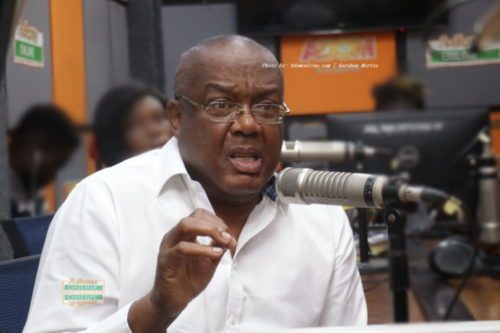 Former High Commissioner to UK, Victor Emmanuel Smith, is claiming that Johnson Asiedu Nketiah, General Secretary of the National Democratic Congress (NDC), is contesting for the party’s Chairmanship position because he wanted to be John Dramani Mahama‘s running mate in the 2020 elections, but was rejected.

According to the former Eastern Regional Minister, Asiedu Nketiah’s rejection by Mahama left him (Nketiah) resentful, which is what is driving him to run for the party leadership so that he would be the leader of the party after the 2024 elections.

Ambassador Smith claimed on Ahotor FM that he and other senior party figures, including former President Mahama, had advised Asiedu Nketiah not to challenge Samuel Ofosu-Ampofo for the chairmanship position because doing so might cause needless conflict, but that Nketiah had refused to heed their advice.

“He had it (the intention to be running mate) in 2020. Like, I said JM (John Dramani Mahama), in consultation with the leaders, had different ideas. If this is not true, somebody should come and tell me.”

“I told him that his move would lead to people spilling out some secrets, but he did not listen. John Dramani Mahama and the party leaders advised him not to contest, but he said he had already decided and it was a democracy,” he said in Twi.

For the position of National Chairman, Mr Nketiah, the party’s departing General Secretary, is anticipated to be a fierce competitor for Samuel Ofosu-Ampofo.

On Saturday, December 17, 2022, the party will hold its national elections.

Already, there is serious trouble between the camp of Mr Nketiah and the incumbent Ofosu- Ampofo ahead of the upcoming National Congress as the two are throwing “insults” against each other.