Why Akufo Addo is addressing nation this Sunday 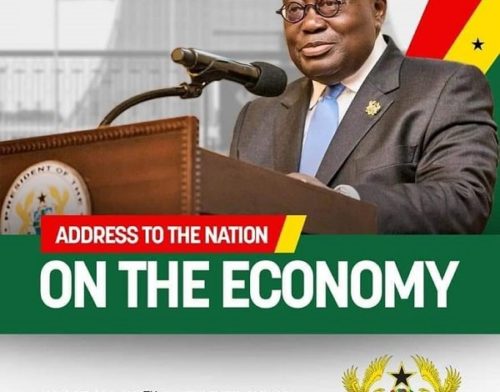 The President, Nana Addo Danquah Akufo-Addo will this Sunday, 30th October, 2022 speak to the nation on critical measures being taken to address the crisis facing the economy.

The President, announced this in a tweet yesterday after a meeting with labour unions as part of his personal engagements with various stakeholders to calm nerves

“I will be addressing the nation on the economy on Sunday, 30th October, 2022 at 8pm. Watch it live on @NAkufoAddo, GTV and all major news networks across the country. #BouncingBackTogether,” Mr Akufo-Addo’s tweet read.

His address comes in the wake of increasing agitations and demands for the dismissal of his Finance Minister, Ken Ofori Atta , his deputy, Charles Adu Boahene as well as the dissolution of the entire Economic Management Team.

Last Tuesday about 80 members of the Majority group in Parliament, joined the chorus asking for the immediate removal of the two to restore investor confidence and the economy from further deterioration.

But the NPP MPs, have since made a U-turn after they were invited into an emergency meeting by the President.

In a brief statement, the MPs said after listening to the President’s plea for more time, they have deferred their call till an IMF deal is secured.

“until the conclusion of the round of negotiations with the International Monetary Fund (IMF) and the presentation of the Budget Statement and Economic Policy in November, 2022 and the subsequent passage of the Appropriation Bill after which time the demand will be acted upon.” ,… part of the statement signed Majority Leader, Osei Kyei Mensah Bonsu

The MPs had earlier vowed to boycott the approval of the 2023 budget.

“If our request is not responded to positively, we will not be present for the budget hearing, neither will we participate in the debate,” Mr Andy Appiah-Kubi, spokesperson for the Majority caucus and MP for Asante-Akim North Constituency warned. 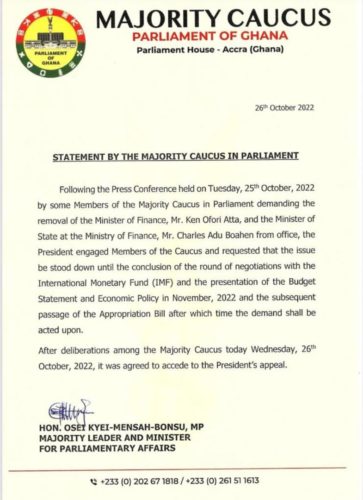 The President, his entire cabinet and the Bank of Ghana have been holding separate meetings with the Association of Ghana Industries, Forex Bureau operators, Ghana Private Road Transport Union, CEOs of various commercial banks, the Association of Market Women and labour unions at the Jubilee House.

The meetings according to Information Minister, Kojo Oppong Nkrumah have been discussing the depreciation of the cedi and measures to stem the free fall, the worsening economic hardship associated with inflation and the high cost of doing business among others and to seek their support in these difficult times.

The development comes days after traders in the central Business District of Kumasi, Adum, closed their shops in protest over the cedi depreciation and a similar protest by the Ghana Union of Traders Association in Accra.

In his meeting with the labour unions, President Akufo-Addo disclosed that government is close to having a programme with the International Monetary Fund (IMF).

“We are talking and, hopefully, concluding soon. These important negotiations that we are going to have will have a positive impact on the Ghanaian economy in the months immediately ahead”, he said.

Government is seeking a US$ 3 billion bailout from the Bretton Woods Institution after months of struggle with the economy and a cost-of-living crisis.

Tags Why Akufo Addo is addressing nation this Sunday