Breaking News
Home / News / When did humans first start to speak? How language evolved in Africa , a Must Read Story.

When did humans first start to speak? How language evolved in Africa , a Must Read Story. 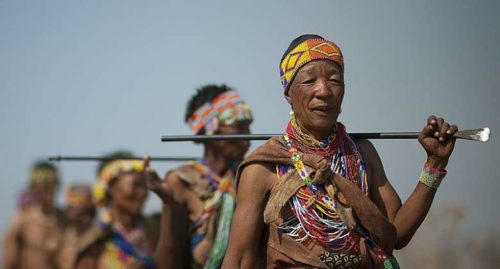 Descendants of the indigenous San people in the Kalahari Desert. – Source: Eric Lafforgue/Gamma-Rapho via Getty Image

When did humans first begin to speak, which speech sounds were uttered first, and when did language evolve from those humble beginnings? These questions have long fascinated people, especially in tracing the evolution of modern humans and what makes us different from other animals. George Poulos has spent most of his academic career researching the phonetic and linguistic structures of African languages. In his latest book , On the Origins of Human Speech and Language, he proposes new timelines for the origins of language. We asked him about his findings.

When and where did human speech evolve?

Research carried out for this study indicates that the first speech sounds were uttered about 70,000 years ago, and not hundreds of thousands or millions of years ago, as is sometimes claimed in the literature .

While my research has been primarily based on phonetic (speech sounds) and linguistic (language) analyses, it has also taken into account other disciplines, like palaeoanthropology (the study of human evolution), archaeology (analysing fossils and other remains), anatomy (the body) and genetics (the study of genes).

The transformation of Homo sapiens (modern humans) from a “non-speaking” to a “speaking” species happened at about the same time as our hunter-gatherer ancestors migrated out of Africa.

When those early adventurers migrated beyond the African continent, they took with them the greatest gift ever acquired by our species – the ability to produce speech sounds, enabled by the creation of a “speech” gene. It was that ability, more than anything else, that catapulted them into a world in which they would dominate all other species.

Which speech sounds were first uttered?

The very first speech sounds ever produced were not just random involuntary sounds. Underlying these speech sounds was a fledgling network that connected certain areas of the brain to different parts of the vocal tract. Various anatomical and environmental factors contributed to Homo sapiens’ ability to produce speech sounds for the first time ever.

Another interesting factor was an apparent change in the diet of our early ancestors and the possible effect it might have had on the human brain. The change to what was essentially a marine diet rich in omega 3 fatty acids occurred when those early humans migrated from the interior to the coastlines of the continent. George Poulos

The vocal tract developed gradually over a long period, and the different stages in its development determined the types of sounds that could be produced. At the time of the “out of Africa” migration, the only part of the vocal tract that was physiologically developed to produce speech sounds was the oral cavity (mouth area).

The only speech sound that could be produced entirely in the mouth at the time was the so-called “ click ” sound. The airstream could be controlled within the mouth. Clicks are the only known speech sounds that behave in this manner. They still occur today in a few African languages – predominantly in the Khoisan languages spoken in parts of Botswana, Namibia and South Africa.

Clicks occur in less than 1% of the languages of the world. They also occur in a few isolated instances in East Africa and in certain languages of South Africa that adopted the clicks when they came into contact with the Khoisan. Clicks have also been noted in one instance outside the African continent, in an extinct ceremonial language register known as Damin in Australia.

An example of a click speech sound is the so-called “kiss” (or bilabial) click where the lips are brought together, and the back part of the tongue is raised against the back of the mouth. The lips are then sucked slightly inwards, and when released a click sound is produced. The production of the alveolar click. Courtesy George Poulos

My research suggests that the “kiss” click was probably the first speech sound ever produced by Homo sapiens. As time moved on, the various parts of the tongue became more and more manoeuvrable, making it possible for other click sounds to be produced in the mouth as well.

So, when did the other speech sounds evolve?

This study demonstrates that the production of all the other human speech sounds (the other consonants, as well as all the vowels) began to take place from approximately 50,000 years ago. This was dependent on the gradual development of a well-proportioned vocal tract which included the mouth, the area behind the mouth (the pharynx), the nasal passages, and the all-important larynx with its vocal cords. Three airstream mechanisms evolved for the production of all speech sounds, and they evolved gradually in successive stages.

How did humans communicate before clicks?

Before this, the only sounds humans could produce were the so-called “vocalisations” or vocal calls. Those were imitations or mimics of various actions or sounds that humans were exposed to in their environment.

Read more: The first-ever dictionary of South Africa’s Kaaps language has launched – why it matters

They may have also been involuntary sounds which expressed various emotions or the involuntary sounds made when yawning, sneezing etcetera. These must not be confused with the very intricate mechanisms that are involved in the production of the speech sounds which form the foundations of what we recognise today as human language.

And the use of full grammatical language?

As the different speech sounds evolved, they combined in various ways to form syllables and words. And these in turn combined with each other in different ways to generate the structural types of grammatical sentences that characterise modern languages.

The initial ability to produce speech sounds was the spark that led to the gradual evolution of language. Grammatical language did not evolve overnight. There was no “single silver bullet” that generated language.

The indication is that human language was a fairly late acquisition of Homo sapiens. It is argued in this study that language, as we know it today, probably began to emerge about 20,000 years ago. A San elder paints a child’s face. Hoberman/Universal Images Group via Getty Images

We observed earlier that the first speech sounds were uttered by the ancestors of the speakers of present-day Khoisan languages. In the light of this observation, it would be reasonable to assume that they had a head start in being the first to speak a grammatical language as well.

To date there is no substantial phonetic or linguistic evidence to indicate that other species such as the Neanderthals could have ever spoken a grammatical language. They did not have the required vocal tract dimensions for speech sound production, let alone the morphological and syntactic structures that were required for grammatical language.

Why does this all matter?

The utterance of the very first speech sounds about 70,000 years ago was the beginning of a journey that was to lead to the evolution of human language.

Language has provided the medium of communication that has played a pivotal role in the momentous developments that have taken place from the earliest known “written” records that we have access to (some 5,500 years ago), to the highly sophisticated technological advances that we are witnessing today.

George Poulos does not work for, consult, own shares in or receive funding from any company or organization that would benefit from this article, and has disclosed no relevant affiliations beyond their academic appointment.

When did humans first start to speak? How language evolved in Africa 2022-12-11
admin
Share

Tags When did humans first start to speak? How language evolved in Africa