Breaking News
Home / Politics / ‘What’s Wrong If I’m ‘Affiliated’ to Duffour when you all secretly go to him for cash?’ — Pablo to NDC Critics

‘What’s Wrong If I’m ‘Affiliated’ to Duffour when you all secretly go to him for cash?’ — Pablo to NDC Critics 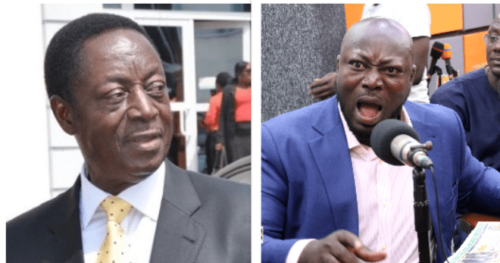 National Youth Organizer elect of the Opposition National Democratic Congress George Opare Addo Pablo has said some members of the party who attack Dr. Kwabena Duffour go to him for money.

George Opare Addo said he has been accused of being associated with the defunct Unibank founder as if associating with the NDC party figure is wrong.

He was speaking on Power FM restreamed by MyNewsGh.com.

“Some of the people who insult the man secretly go to him for money. I will mention names today if you allow me. Sometimes I am in his house and they come there. Dr. Duffour is a great man and a key NDC figure who was Finance Minister and Governor of the Bank of Ghana so there’s nothing wrong to be with him. But they insult him and go to him for money”, Opare Addo said.

“That small boy at Airport Hills goes to him for money… I have evidence” he added making reference to Sammy Gyamfi.

“My family has known and is associated with the Duffour family for a long time. We have done businesses together and I am not shy to say I go there. Is he not a member of the NDC? Doesn’t the party go to him for funding? I have gone to him for money in 2016 before to prosecute the campaign in Ashanti Region. So what is wrong if I am associated with him?….  But when it comes to the flagbearership, I have said it over and over again that this time is for John Mahama. He is the one we are going with” he explained.

In the just ended elections, it is believed that John Mahama sponsored and supported Yaw Brogya Genfi against George Opare Addo.

There has been claims that George Opare Addo Pablo will play a key role in a future campaign team of Dr Kwabena Duffuor for the flagbearership position of the National Democratic Congress (NDC) ahead of the 2024 elections.

The brilliant, Charismatic former Finance Minister, Duffour will be challenging former President John Dramani Mahama for the NDC’s flagbeareship position ahead of the 2024 elections.

A team was floated around believed to constitute the core of the campaign team expected to rally around Dr. Duffour, including Opare Addo and former National Organiser of the NDC Yaw Boateng Gyan who was quoted to have declared his support for him even before he declares.

But the National Youth Organizer of the National Democratic Congress denied all such ties although there were deep ties between Dr. Duffour and Opare Addo who allegedly spends a lot of time with the old man for strategy sessions and advice

Tags ‘What’s Wrong If I’m ‘Affiliated’ to Duffour when you all secretly go to him for cash?’ — Pablo to NDC Critics