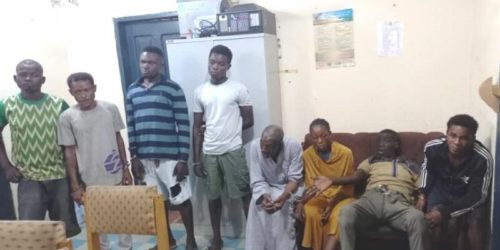 The Wenchi Divisional Criminal Investigation Department (CID) in collaboration with the Police Intelligence Department in the Wenchi Municipality of the Bono region have arrested eight suspected wee smokers and set ablaze a marijuana “weed” base.

The suspects, including one lady, Nasiba Ubeida aged 19, were rounded up at Kaamu, a suburb of Wenchi following a special exercise.

The suspects are currently in police custody assisting with investigations. The police said some dried leaves, suspected to be narcotic drugs, known as ‘wee’, were found on the suspects.

The police added that the suspects would be thoroughly screened and those found culpable would be arraigned before court.

The Chronicle gathered from the police that the operation was very successful and there are plans to replicate such operations in other ‘ganja’ bases within the municipality during the Christmas period.

Mr. Francis Nantwi Boateng, the Assembly Member of the area, commended the police for the exercise.

In an interview with Wenchi based Radio West Africa, the assembly member said the police undertook the exercise because ‘wee’ smokers have been disturbing inhabitants living in the area.

Previous Ghana must diversify from cocoa to agro-chemicals, others -Alan
Next E/R: We’ve not seen tarred roads since independence – Mangoase residents