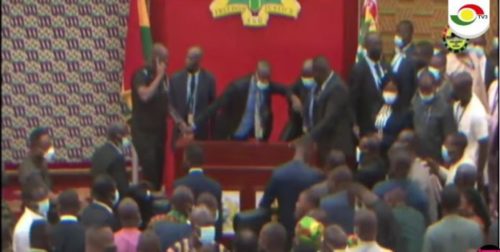 Minister of Finance Kenneth Nana Yaw Ofori-Atta is urging Parliament to ensure that the Appropriations Bill of the 2023 fiscal year is passed.

He said failure to pass the Bill in time will negatively affect the gains made in arresting the economy from total collapse.

Addressing Ghanaians in a public broadcast on Monday, December 19, Mr Ofori-Atta cautioned Parliamentarians not to repeat mistakes of 2022.

He said such mistake will be too huge for the country’s economy to bear.

“That is why we urge Parliament to support us in getting the Appropriations Bill for the 2023 fiscal year passed,” he said.

“We also urge Parliament to support in particular new revenue measures outlined in the 2023 budget which aim to improve revenue mobilisation. We cannot afford to repeat the mistakes of 2022.”

This is in reference to the initial rejection of the 2022 budget, particularly the disapproval of the Electronic Transaction Levy (E-levy).

Despite the budget being approved later, it took several months – punctuated by brawls in Parliament – for the e-levy to be passed.

Even that saw a reduction in the threshold and percentage of deduction, from 1.75 percent to 1.5 percent.

Mr Ofori-Atta fears if measures are not taken, the economy will crash.

Meanwhile, the Finance Minister is facing removal from office as members of Parliament (MPs) belonging to his party are waiting for President Nana Addo Dankwa Akufo-Addo to relieve him of his post.

The Majority MPs had asked the president to remove him before the 2023 budget was read and vowed to have nothing to do with government business if otherwise.

Nonetheless, they were talked into backing down on this demand to wait until the exchequer has negotiated a deal with the International Monetary Fund (IMF).

The Minority group, however, took this demand, which its members had also been making, further with a vote of no confidence.

The motion on the vote of censure was lost after the Minority failed to secure enough numbers to get it through.