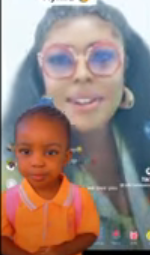 Maverick socialite and Ghanaian actress, Afia Schwarzenegger, has announced that she has returned Nhyira, a six-year-old girl she adopted, back to her parents.

If readers will recall, earlier this year in May, after Afia Schwarzenegger disclosed that she had a new daughter, a girl she adopted months ago.

She called her Agude3 Nhyira.

This announcement by the comedienne was met with fierce opposition by internet users who believed the actress’ controversial lifestyle and public abuse of alcohol would have a detrimental effect on the growth and character of Nhyira and, as such, the child should be taken away from her.

There were rumours that the said orphanage, where Afia Schwar adopted her daughter, was after her for the child.

Fast forward to September 2022, the outspoken socialite has revealed that she has returned Nhyira back to her parents.

According to her, Agude3 Nhyira was a poor child she knew from church and wanted to help, but the actions of some internet users have compelled her to abandon that plan.

“I didn’t and I don’t know anything here at all. I saw a very poor, innocent child in my church and I just wanted to help. Nhyira has got a very sad story and I wanted to help, but that dream has been cut short,” Afia Schwarzenegger explained in a viral video.

The socialite wished Ghanaians were measured and calculated in their comments so she could have properly taken care of Nhyira.