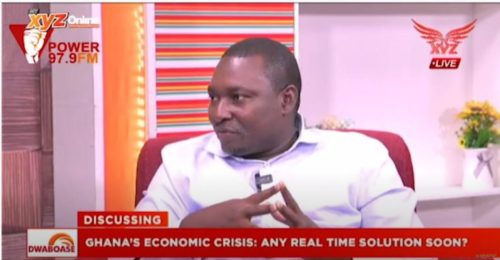 A communication member of the New Patriotic Party, Solomon Owusu, has justified why President Akufo-Addo told residents of Kwabre that threats do not frighten him.

Speaking to Prince Minkah on Dwaboase on TV XYZ, the NPP man observed that the statement the president made on Kumasi-based OTEC FM did not mean he is on not caring but rather stated it was a slip of tongue.

President Akufo-Addo came under fire in Kumasi when he said that he is not threatened by calls for the New Patriotic Party (NPP) to be voted out of office in the 2024 election.

Reacting to threats from residents of Kwabre in the Ashanti Region over bad roads, Akufo-Addo told host Captain Koda that the people could vote for the NDC if they wished, adding that threats do not frighten him.

Owusu, however, acknowledged the words of President Akufo-Addo as unnecessary, he defended him by saying it was a mistake.

In the quest to defend Akufo-Addo, the NPP communicator said, “this question was a harmless question which required the president to use tact, unfortunately, he forgot himself”.