Volta is my 2nd home -Alan 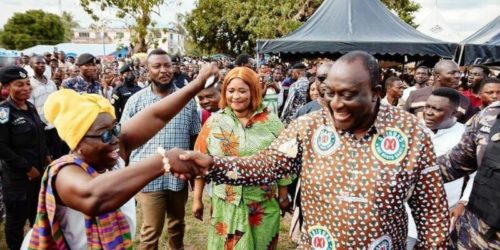 The Minister for Trade and Industry and New Patriotic Party (NPP) presidential aspirant, Mr Alan Kwadwo Kyerematen, has pleaded with the people of Volta Region, which he considers as a his second home  and Ghanaians as a whole, to exercise patience as the government takes  steps to solve the current economic meltdown.

Speaking at the celebration of this year’s Gbidukor Festival by the chiefs and people in the Gbi traditional area over the weekend, the minister, who received a rousing welcome to Hohoe, the traditional capital of the Gbis, said the Akufo-Addo government is aware of the current economic situation and is doing everything humanly possible to stem the tide.

While l congratulate Fiagba of the Gbi Traditional Area, Togbega Gabusu VII, the Regional Minister, other Ministers of State and Members of Parliament of the region for their relentless efforts to bring development to the area, l assure you that government is very much in tune with the current hardships facing all of us and is relentless in its efforts to turn things around, so we can all enjoy the good times again.

In this vein, l wish to appeal to all of you, my Brothers and Sisters, to support government’s efforts aimed at resolving the situation in record time, including the One District One Factory (1D1F) initiative aimed at exploiting local opportunities to create sustainable jobs for all Ghanaians, particularly the youth in their home districts”, Alan Kyerematen pleaded.

The Trade and Industry Minister, who was enthused about the cultural display of the Gbi people, said he considers Volta Region as his second home and that he has a strong bond with the people,  that spans over two decades.

The recent love and affections from natives of the Volta region is a confirmation of the known love affair between the two parties.

The annual Gbidukor festival is the flagship traditional festival celebrated by the people of Volta region.

The New Patriotic Party (NPP) is expected to head to the polls in early 2023 to elect the flag bearer that will lead them to 2024 make or break general elections and Alan is one of the lead contestants.