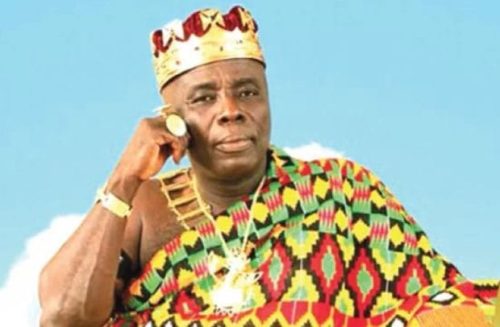 An activist of the National Democratic Congress NDC has told the Okyenhene Amoatia Ofori-Panin to take note that fools grow old too.

The NDC activist was reacting to a speech by the Akyem Chief who hit back at persons who criticize and insult President Akufo-Addo over current economic hardship describing them as “uncivilized villagers, witches, and wizards who have no sense of appreciation”.

Reacting to the insults, the NDC’s Yayra Koku wrote:

“Those who insult Akufo-Addo are villagers and witches – Okyenhene

Me: I’m trying hard NOT to write what’s on my mind. But I just saw an inscription on a taxi, and it reads “F00!s do grow old too, becareful who you take advice from”

The Okyenhene Osagyefuo Amoatia Ofori Panin who is thd the Chief of Akyem Abuakwa days ago warned Ghanaians to appreciate the significant contribution of President Akufo-Addo to the development of the country as a result of the numerous policies such as Free Senior High School implemented since assuming office as President.

See also  Somanya: Three injured, one in critical condition in a road accident at Trom

He said the current economic hardship is a global phenomenon tagging critics of the President as villagers, witches and wizards.

“We must appreciate the feat of the President and show him appreciation for what he has done for Ghana. We must defend and protect him”.

Okyenhene minced no word stating that,”those insulting the President are children of villagers. They are uncivilized. No well-nurtured person will insult an elderly. If you were raised in the Church you will not insult an elder. If you are not villager then you may be a witch or wizard” .

See also  #KenMustGo: NPP MPs back down on call to allow for 2023 budget reading