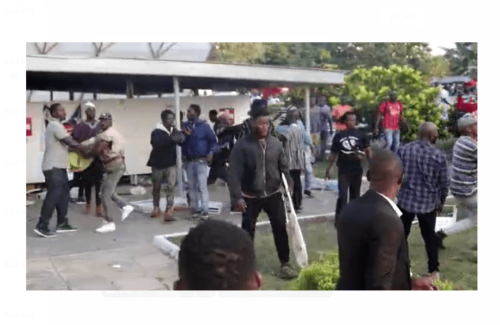 Videos in the possession of MyNewsGh.com reveals shocking scenes from the just-ended Women and Youth Conference of the National Democratic Congress (NDC).

In the videos that have since gone viral, one could see supporters of the National Youth Organizer, Opare Addo and Brogya Genfi clash.

The supporters made up of well-built men threw stones at each other and attacked their opponents with chairs and any item available to them.

It is not clear why supporters of the two contenders clashed.

However, patrons of the conference said it was bloody that some casualties were recorded.

The National Democratic Congress (NDC) on Saturday, December 11, 2022, elected its Women and Youth Organizers to steer the affairs.

The Women Organizer Dr Hannah Bissiw and George Opare Addo who are incumbents have been maintained for the position.