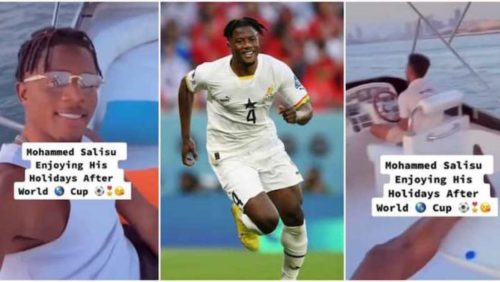 Ghanaian football star Mohammed Salisu, in a video, went on a luxury boat ride to unwind after a hectic World Cup campaign in Qatar.

The Black Stars performed relatively well at the World Cup but were unfortunately beaten by Uruguay and knocked out of the tournament.

Mohammed Salisu was one of the most outstanding players during the campaign and has won the hearts of many Ghanaians despite the Black Stars being kicked out of the tournament.

See also  When Will you learn to appreciate bureaucracy and transparency to devoid from corrupt practices.......Prof Mandora fired TEIN-UEW Executives.

The talented defender, who plays for Southampton, took a well-deserved break as he had a good time on his boat cruise.

Salisu looked handsome, as always, in the video. He wore some fashionable see-through glasses and had on just shorts and a singlet as he records himself.

Salisu smiled brightly and showed his perfect set of white teeth. His handsome looks left many Ghanaian ladies weak in the knees.