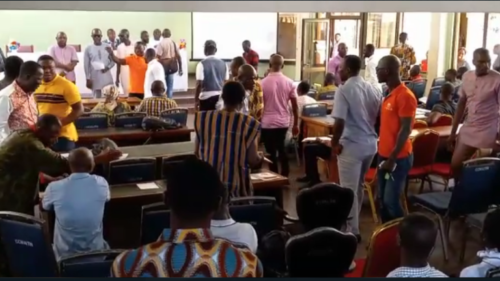 Aggrieved assembly members of the Cape Coast Metropolitan Assembly (CCMA) on Tuesday November 8, 2022, boycotted sittings following the refusal of the assembly to conduct re-election at Nkanfoa Electoral Area when the former assembly member of the area died in a motor accident.

Speaking to MyNewsGh.com on behalf of the aggrieved assembly members, the Assemblyman for Tantri Ayikoayiko Electoral Area, Lamidu Alhassan said their colleague Justice Mensah died on December 2020 but several motions have been raised in the Assembly to conduct a re-election at Nkanfoa Electoral Area to get representative but prove futile.

“Anytime agovernment appointee dies, the Assembly led by the Presiding Member (MP), Mr. Nana Awuku will bring somebody and swear him or her in but refused to conduct re-election at Nkanfoa Electoral Area for two years now since we lost our colleague. Is he by this telling us that people of Nkanfoa don’t need any representative in this house?” He questioned.

“We need something to be done urgently because the people of Nkanfoa are complaining bitterly because they are also paying taxes to the government” Lamidu Alhassan added.

Police Personnel were later invited to the meeting to ensure peace and order but this did not stop the assembly members front chanting war songs in protest of the undue delay in carrying out a constitutional mandate of conducting fresh elections in the area.