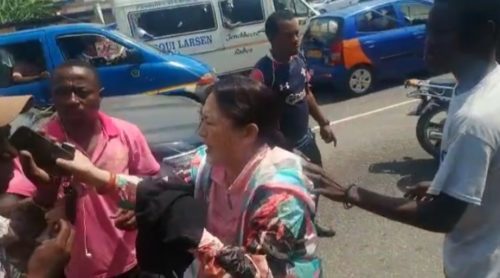 A 54-year-old Chinese businesswoman, Li Yu Zhen has been shot by suspected armed robbers at Caprice on the Circle-Nsawam Highway

Narrating the terrible incident to Kasapa News Akokoraba Nyarko, the victim Li Yu Zhen said she first went to deposit a huge amount of money at the Standard Chartered Bank at the West Hills Mall branch. Upon returning, the suspected robbers on two motorbikes numbered four trailed her to the scene at Caprice, then fired gunshots indiscriminately into her Prado vehicle with registration number GN 8188-22

The suspected robbers then demanded that the woman hands over her bag but she struggled with them over it and one shot her left hand.

They bolted with an unspecified amount of money which was in the bag, leaving her two fingers shot.

She was then sent to the Entrance Hospital in Accra New Town for first aid, then later transferred to 37 Military hospital for treatment.

The victim is said to be in stable condition and receiving medical attention.

Meanwhile, Police say they are pursuing the gang of armed robbers.

A terse statement from the Police on the incident said “Special intelligence and operations teams have been deployed to trace and arrest the suspects involved; we will surely get them arrested to face justice.”