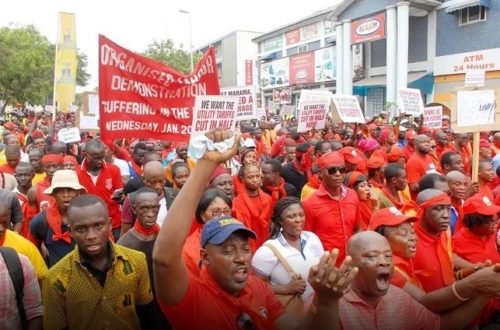 National President of the Ghana National Association of Teachers (GNAT), Rev. Isaac Owusu has spoken about compliance among teachers after a strike action was declared.

The indefinite strike which was declared by three teacher unions on Friday 4th November, 2022, followed the appointment of Dr. Eric Nkansah as the Acting Director General of the Ghana Education Service (GES).

The teacher unions are vehemently resisting the appointment of Dr. Eric Nkansah as Acting Director General of GES because he has not been through the mill as a professionally trained teacher.

However, this decision by the teacher unions has been met with divergent views as some teachers have decided to stay away from the classroom whilst others have defied the directive to embark on strike.

“Certainly when you declare strike you might not get 100 percent full compliance but what is important is that the various counsel of the union have given us that mandate to declare the strike,” he told Onesiphorus Obuobi on ATL FM in Cape Coast.

“So it’s up to the reps who are part of the counsel to make sure that within their jurisdiction they make sure that the enforcement of the strike take it’s full course,” he said monitored by Amansan Krakye of MyNewsGh.com