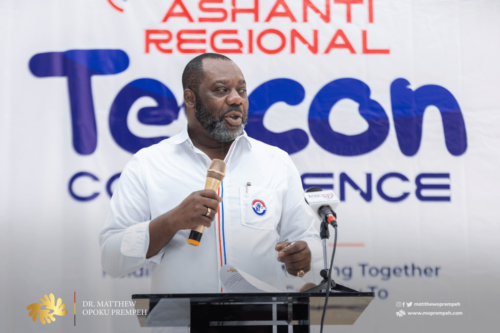 He pointed to the depreciation of the Ghana cedis against the Dollar as one of the problems government had been faced with but was quick to add that it would have been worse if any other political party was in charge of the Ghanaian economy at this time.

Speaking to members of the Tertiary Students Confederacy (TESCON), in the Ashanti Region at a conference in Kumasi, NAPO as he is popularly called said the cedi which dropped to an all-time lowest in history would have hit Ghs48 to a dollar if the National Democratic Congress(NDC) was in power.

“The worse in NPP is far better than the best in NDC. Some of you are motivated to serve NPP, know that you are motivated to serve the best. It is only NPP that can make Ghana better. No matter the circumstances that you are in, just imagine if it was NDC it would have been times three. If NDC was in government the dollar that could have gotten to 16 would have gotten to 48,” he said.

He admonished the young patriots to keep faith with the party and government amidst the prevailing challenges and eschew in-fighting, animosity and acrimony as such tendencies could potentially affect the ability of the party to break the 8.

“No TESCON member should have a divided mind about 2024. It is better to be the garden boy of the ruling party than to be the landlord of the opposition party,” he added.