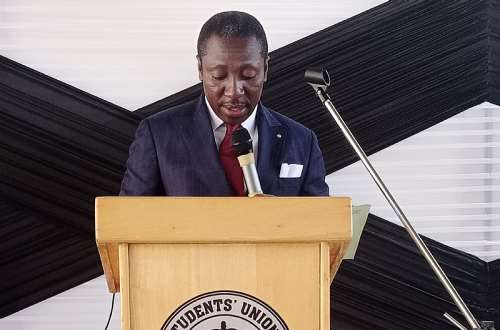 “The law is not as straightforward as it looks, and the law you study is not the same as the law you practice hence, it is important for you to remember that the law had taken different forms and shapes, hence, it does not take timorous souls to make changes in society through the law.”

The Member of Parliament for Effutu Constituency, who also doubles as the Deputy Majority leader of Parliament, Hon Alexander Kwamena Afenyo Markin, gave the admonition when giving a lecture at the 6th Law Week Celebration, 7th Legal Luminaries Conference of the Faculty of Law, UCC.

Speaking on the theme, “Judicial Independence in Ghana, the Balance Sheet”, Afenyo-Markin maintained that the topic comes at a time of heightened unsubstantiated allegations that the country’s judiciary has lost or is losing its independence.

Defining the theme, he noted that the judiciary must not only profess independence but, must be seen by all keen observers as genuinely independent.

According to him, it is defined as the ability of judges to function independently from outside influences that may corrupt them and their ability to administer justice fairly.

“The notion requires that judges must be free to exercise their judicial authority without interference from litigant, the state, the media or influential people in society or other entities”, he stated.

According to him, judicial independence is a foundational pillar for mounting and maintaining judicial integrity and the rule of law.

The Deputy Majority Leader stressed that even though the framers of the 1992 constitution gave executive power to the President to make appointments to the highest courts, article 125,127, clearly gives authority to the judiciary in the discharge of their duties without interference.

He reminded the students that they will meet judges who will disappoint or intimidate them in their line of work but in all of these, they should take it as part of the learning process and not give up.

“These are to test your strength. Don’t be a lawyer whose practice ends at the circuit court and never want to take cases at the high courts. At the Courts of Appeal they run away, as for the Supreme Court they would not even dare.

“Tell yourself that your practice will end at the Supreme Court and you will challenge the law, and let the 9 judges put questions at you, get disappointed, come back home, prepare and go back again,” he stated.

He called on the law students not to take banters, arguments and exchanges between them and other colleague lawyers in court personal. He added that they should not attack their colleagues simply because they disagree with them or won a case. According to him, same colleague may be their lawyer who will be writing their notes for them in future.

Afenyo-Markin admonished them to tolerate each other in school, which is the beauty of the path they have chosen.

The guest speaker, Member of Parliament for Madina Constituency, Hon Francis Xavier Sosu, in his presentation, made reference to a recent survey on procedural justice of the judiciary and the police institution, which revealed that about 66% of the respondent said they do not have confidence in the justice system. Out of these respondents, 24% of them were indecisive and doesn’t care what happens anymore when it comes to the justice system.

He said survey noted that 10% of the respondent were not even sure whether the country’s justice system is fair or not.

“There are serious threats to our collective existence, that is why it is important to have forums like this to have the chance to interrogate the issues dispassionately.

“Some of these threats are political interference, threats of the sustainability of the current structure of unbalanced budgetary allocations and threat of lack of comprehensive internal mechanisms to address the issues of judicial appointments”, he disclosed.

Mr. Sasu hinted that if the country fails to address these issues she risks losing her democracy which is the rule of law.

The head of legal affairs, UCC, Mr. Solomon Faakye, Esq, indicated that until the constitutional provisions that give the President the authority to appoint judges are repealed or reviewed, the same will continue to happen in the appointment of judges.

He said the President in consultation with the council of state, does not necessarily mean that the President is under obligation to take the advice. According to him, what Ghana need to consider is whether is ready to allow this system continue or give the Chief Justice that mandate to do the appointment as it pertains in other countries.

He said it is not always the case that judges appointed will do the bidding of the appointing authority otherwise, “we will create a perception that judges are always influenced by other political considerations.”

The president of the Legal Student Union, UCC, Mr. Erasmus Quartey, indicated, “there are constitutional provisions that insulate the judiciary from any interference, however, the judiciary has made a lot of progress especially, under the fourth republican constitution compared to previous constitutional regimes, where justices have been removed just by the call of the president.”

He said the 1992 constitution has provided that barer for the justices. “Is the president mandated to do those appointments, are there vacancies to be filled at the highest courts, ‘if yes then that job needs to be done”.

He continued, “There is therefore, no need for people to lament about these appointments, more so going round to dig the background of the person, his or her religious or political affiliation, instead of looking for competence.”

According to Mr. Faakye there has been several reports in the media which seems to undermine the integrity, neutrality and independence of judges. According to him, the forum was to gather legal brains to help proffer some sustainable strategies, solutions to help address some seaming perceptions of judicial independence.