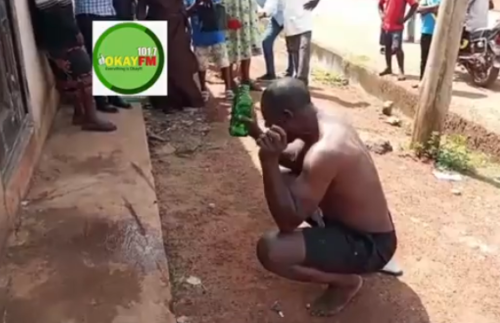 A member of the National Democratic Congress (NDC) in Tepa in the Ashanti Region has cursed the party’s regional and constituency leadership for disqualifying him from voting.

In a video which has since gone viral, the man whose identity cannot be readily ascertained said the party disqualified him from voting because he has squandered money belonging to the party.

To him, he hasn’t been treated fairly by the leadership of the party in the constituency and the Region and therefore has called on the lesser gods to fight the battle on his behalf.

The National Democratic Congres (NDC) has begun voting for executives who will steer the affairs of the party ahead of the election 2024.

The party is of the belief that it will annex power from the governing New Patriotic Party in the election.

However, their branch election which is currently taking place has been fraught with a number of anomalies including members of other political parties contesting for positions in the political party.

Previous See something, say something; 21 foreign nationals with suspicious behaviour arrested
Next Soldier Nabbed For Stealing GH₵23,000 Is An Imposter -GAF