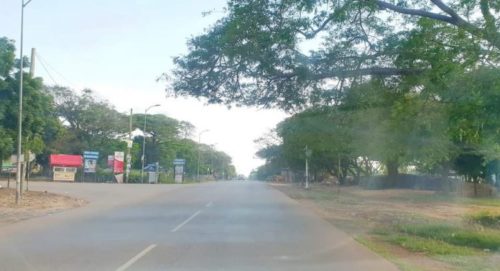 The entire Tema metropolis in the Greater Accra Region has become dead following the conformity with the lockdown directive from the Tema Traditional Council (TTC) over the funeral of the late chief, late Osonnaa Nii Adjei Kraku II.

The sound of a pin dropping on the roads of the metropolis can be heard clearly as the whole neighbourhood looks deserted.

Streets in the Tema township including the central business district deserted with no human movement.

All businesses in the area, including factories, companies and shops were closed down and all residents were locked up inside their various homes.

Educational institutions were not left out in the restriction order as pupils and students were given holidays today Friday October 28, 2022 as their schools had been asked to close.

The situation is not different at Ashaiman which falls under the Tema Traditional Area as the Divisional Council also announced a two-day closure of all shops and market centres in the Municipality.

The residents witnessed a unique spectacle on Wednesday night as the traditional authorities spent the night holding a traditional ceremony for the late Paramount Chief.

It marked the beginning of funeral activities for the late chief’s funeral by the Traditional Council.

Prior to the event, townsfolk had been strongly advised to stay indoors due to the sensitive nature of the programme.

It was due to a scheduled blackout from 7pm to 12am in line with Ga customs as a sign of honour to the deceased chief.

Prior to that, staff-wielding traditionalists patrolled the streets with some carrying pots on their heads in mourning.

Later in the night, it was a surreal experience. Hundreds costumed in ceremonial regalia sang dirges amid carrying objects and candles as residents locked themselves indoors.

News of the death of the late Tema Mantse officially broke out in March 2020.

The spokesperson for the Tema Traditional Council, Nii Amarh Somponu, announced the sad news on March 18, 2020.

The final funeral rites of the chief will be held on Saturday, October 29.

Previous If Akufo-Addo’s men are failing, he should use the women – Ohene Agyekum
Next Dr. Bawumia List 3 solutions to Ghana’s economic crisis