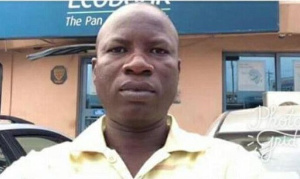 The Ayawaso North constituency chairman of the opposition National Democratic Congress (NDC), Ahmed Tahiru who was suspended by the party over guns allegations has been reinstated.

Tahiru was suspended by the party for reporting to the police that the NDC National Vice Chairman, Alhaji Said Sinare, has allegedly supplied guns to some youth to cause mayhem in the 2020 polls.

Tahiru, according to his lawyer, Theoplilus Donkor found two guns in an NDC vehicle he had picked on Sunday for party activities.

He however found the guns in the vehicle the following morning Monday and reported the matter to the police and handed over the two guns, an AK-47 and a pump action gun.

The Accra Region Police Command initiated investigations into the matter and invited Alhaji Said Sinare to assist with investigations.

Alhaji Sinare admitted ownership of the pump action gun but he claimed was missing and had been reported to the Cantonments Police Station about a month earlier but denied owning the AK-47 assault rifle.

However, this action taken by the NDC Ayawaso North chairman, according to the party, is a breach of Article 46 (8) of the party’s constitution.

The party was of the view that, Tahiru should have reported the incident to the party for internal mechanisms to have been used to resolve it than running to the police.

According to the Greater Accra Regional Chairman of the NDC, Kobina Ade Coker, the indefinite suspension was in the right direction because Tahiru failed to follow laid down rules for getting issues resolved in the party.

“We have structures in the party, if you have any grievances there is a way you go about it in the party, you report officially to the party and the party will investigate. But where we have a constituency chairman taking a whole national vice chairman to the police station without recourse to party intervention, we feel he’s gone too far, and we need to set him aside so that we can investigate the issue and then the right things would be done,” Mr Coker said in a radio interview with Accra based Citi FM.

He said the allegation was a very serious matter and that the steps taken with respect to the suspension was the right way to go as the decision would be forwarded to the National Executive for further action.

“He went to the police station, submitted some guns claiming that our national vice chairman had given those guns to go and perform certain action. We have investigated it and we deem it that we need to step him aside and investigate further and that is what we’ve done, we’ve taken the first step to investigate as a party,” Mr Coker said.

Mr Coker therefore directed Tahiru to the National Executive and make any submissions about it.

But the lawyer of Tahiru, Theophilus Donkor in a radio interview with Citi FM gave a contrary view, saying that Tahiru only told the police that he found those weapons in a party vehicle, which he had been using but had been parked at Santeo since 2016.

He said the vehicle had not been broken into and that he had the keys with him.

Explaining why Tahiru chose to report the matter to the police, Mr Donkor said, “possession of firearms without authority or to use the word license to handle weapon is a criminal offence under our law and it is a first degree felony if you are charged under Section 192 of Act 29, so if a citizen finds a gun in a car that has been parked for almost 4 years and he says that I’m giving it to the police, because at that time, he doesn’t know who owns that gun, so the best thing to have been done, which he did was to hand over the guns to the police.”

Meanwhile, the NDC in a fresh letter dated October 29, 2022, signed by the General Secretary of the party, Johnson Asiedu Nketiah, cleared Ahmed Tahiru of any wrong doing.

“I have received a report from the Greater Accra Regional Disciplinary Committee regarding Ahmed Tahiru.

“After carefully studying of the report, i concur with the findings of the report and directed that Ahmed Tahiru be reinstated immediately.

“The net effect is that Ahmed Tahiru can contest the Constituency elections,” the letter cleared.

But prior to the released of the aforementioned letter, Alhaji Sinare had written to Johnson Asiedu Nketiah in a letter dated October 21, 2022, announcing his decision to withdraw from the National Vice Chairmanship race of the party.

He further asked the party to refund all his filing fees.