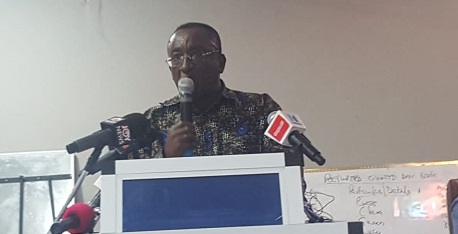 The Minister of Food and Agriculture, Dr Owusu Afriyie Akoto, has called on residents around border towns to help check the smuggling of food commodities, particularly grains from the Upper West Region to neighbouring Burkina Faso, Niger and other countries.

The Minister bemoaned the smuggling of farm produce from the region and said it was inimical to efforts by government at ensuring food security all year round.

Dr Akoto stated this when he visited the region on Monday to interact with staff of the Department of Agriculture across the region on the successes as well as gaps in the sector for redress.

The meeting which saw the presence of agricultural extension officers, municipal and district directors of agriculture, input dealers as well as regional officers was climaxed with a visit by the sector minister and his entourage to some micro-agro processing companies and cashew farms in the region.

The minister stressed that “this region has issues with smuggling; first it was the smuggling of government’s subsidised fertiliser to Burkina Faso and other areas which has been halted due to reduction of the subsidy and now attention has been shifted to the smuggling of large quantities of grains which are harvested in abundance as a result of government’s interventions in the agriculture sector,” he lamented.

He explained that the attitude was uncalled for and should be nipped in the bud immediately to avoid thwarting government’s efforts at enhancing the agriculture sector of the country.

“How do we send food, huge tonnes of grainsto countries whose governments have not contributed anything to production when the very citizens with whose taxes government improved the agricultural gains of the country benefitted less?” he queried.

The sector minister charged the Regional Directorate of Agriculture to collaborate effectively with the municipal and district offices to check the menace and halt the smuggling of grains which was to the detriment of Ghanaians.

The minister explained also that government subsidised fertiliser for farmers as part of the PlantingforFood and Jobs (PFJ) programme to enable farmers produce in large quantities but said due to the cost of fertiliser at the world market, government was forced to reduce its subsidy on the product as was available now.

“But you will agree with me that with the improved seeds we have now, even at the current subsidised prize, you are still able to make inroads if you are able to purchase fertilizer at its current prize and apply a little,” he said.

He maintained that it was also necessary for farmers to shift focus from inorganic to organic fertilizer as they were readily available and also used the opportunity to congratulate all stakeholders for their respective roles in contributing to the food basket of the country.

For his part, the Regional Director for Agriculture, Mr Emmanuel Sasu Yeboah, said that although the region was faced with issues bothering on climate change, it was performing creditably and contributing its quota to the food basket of the nation, particularly in the production of grains like maize and soya bean.

He mentioned that the region had very limited rainfall this year as compared to last year and said it affected farmers who tilled their land later in the year and called for more interventions in irrigation to promote agriculture in the region.