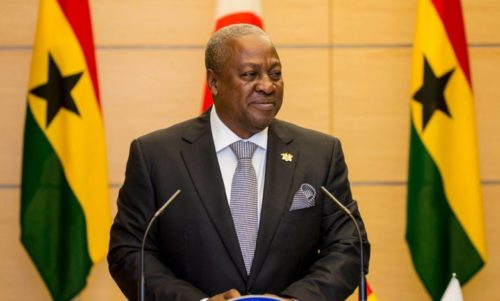 Former President John Dramani Mahamahas urged the National Communications Officer of the National Democratic Congress (NDC), Sammy Gyamfi, and the newly-re-elected National Youth Organiser, George Opare Addo, to ceasefire on their public banters at each other.

According to him, the exchanges bring no benefit to the party but only serve as a distraction.He therefore urged them to rather keep their eyes on the prize for the ‘Ghana we want’.In a Facebook post, the former president shared two separate pictures that showed his engagements with Sammy Gyamfi and George Opare Addo.

“I’ve had meetings with our Youth Organizer and Communications Officer and agreed with them that the current exchanges must stop. It brings our great party no benefit and only serves as a distraction from the hardship caused by the reckless management of our economy.Let’s keep our eyes on the prize for the ‘Ghana we want’,” he wrote as caption.The two started their public exchanges just after the National Women and Youth conference that was held at the Cape Coast Stadium on Saturday, December 10, 2022.

Prior to the elections, Sammy Gyamfi openly campaigned for Yaw Brogya Genfi, one of the candidates in the race for the National Youth Organizer position.

However, the candidate, Bronya Genfi, lost by 25 votes to George Opare Addo.Speaking in an interview after the elections, George Opare Addo expressed disappointment over Sammy Gyamfi’s position against him, adding that all efforts to reconcile with Sammy Gyamfi proved futile.He also accused Sammy Gyamfi of being an influence peddler and questioned the source of his wealth.