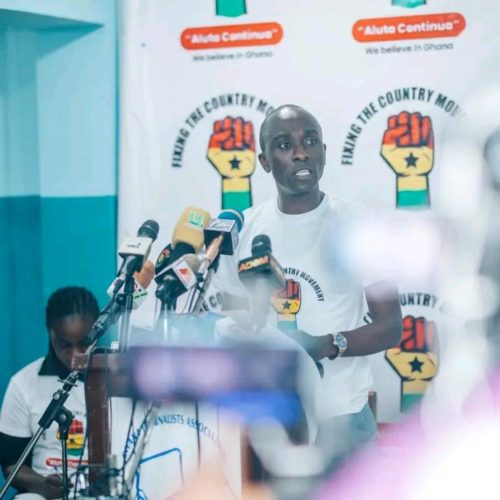 I’ve just read yet another critique slagging off the NPP government and Gabby Asare Otchere-Darko where the author appears not to have even bothered to learn anything about our economic situation.

There are several of this critique from our compatriots here in Ghana but when a foreigner who claims to know it all decides to inflict on us his all-knowing misdiagnosis of our situation, it calls for public concern.

Now, let’s acquaint ourselves with the very commentary under my critical examination:

“Leading member of the New Patriotic Party (NPP) Gabby Otchere-Darko says Pres. Akufo-Addo deserves “praise” for his handling of the economy. SPOILER ALERT: Otchere-Darko must be on another planet. Today, I measure #Ghana’s inflation at a stunning 81%/yr.”

The above commentary is attributed to one Steve Hanke. We are told Steve Hanke is a Professor of Applied Economics at the John Hopkins University in the United States of America.

This stooge who obviously has no knowledge of mere inflation data kept on banging on about pies, the shape of pies, the depth of pies, the different kind of pies, and continue to forecast his own monthly inflation figures for Ghana. His understanding of our economic situation itself without the corresponding data backing it makes absolute nonsense of his works.

He had the temerity to describe Gabby Asare Otchere Darko as someone coming from another planet over his recent tweet that the government needed to be lauded for its handling of the economy.

“The Akufo-Addo govt and, in particular, MoF, deserve the nation’s commendation for their handling of the economy in these most challenging times. Despite slump in revenues, bills are being paid, including salaries, roads being fixed, & money found for programmes like YouStart.”

The US Federal Reserve lifted its cash rate target range by 75bp to 3% to 3.25% on Wednesday, US time. It also indicated it expected increases of as much as another 125bp this year even as Fed chairman Jerome Powell warned of a possible recession.

The British pound has fallen to its lowest level in decades against the US dollar, amid fears over runaway inflation and recession.

It is clear from the collapse in global stock markets and sliding cryptocurrency values that there’s uncertainty. Shares in the US, where the S&P 500 index is down by almost a quarter since January, have suffered their worst start to a year for 60 years.

Western governments have dipped into their reserves, and when that well of cash has run dry, borrowed heavily to maintain a stable outlook for their economies.

We know that an increase in the cost of borrowing in the UK, the eurozone and the US, which is what we are now witnessing, will do nothing to bring down prices.

In Japan, the central bank has come under huge pressure to act after the yen tumbled to its lowest level against the dollar since 1998.

You’d think the likes of Steve Hanke might want to research the current happenings around the world before they jump on the bandwagon, but clearly not.

When opinion writers and so-called academics engage in desperate pedestrian politics, I wish that they would come clear on what exactly they seek to propagate.

Steve Hanke’s behaviour is so shameful and pathetic.

Previous ‘It depends on if I find the right person’ – NSMQ quiz mistress on possibility of another marriage
Next Queen Elizabeth II’s resting place: Buckingham Palace releases photo of Queen’s tomb