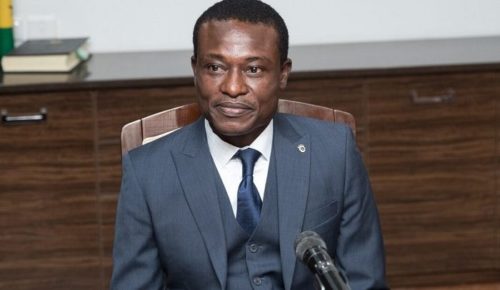 Office of the Special Prosecutor has confirmed the commencement of an investigation into the actions of Charles Adu-Boahen, former Minister of State at the Finance Ministry as captured in the Anas Arimiyaw expose.

This follows a letter from the Office of the President to the Special Prosecutor to investigate allegations of corruption leveled against Charles Adu Boahen as contained in the investigative piece carried by Tiger Eye PI and investigative journalist, Anas Aremeyaw Anas, titled ‘Galamsey Economy”

Per a press release dated November 15, 2022, issued by the OSP, it said it has commenced investigation into the action of Charles Adu Boahen and any other person implicated in the documentary.

President Nana Addo Dankwa Akufo-Addo referred the Minister of State at the Ministry of Finance to the Office of the Special Prosecutor over an investigative documentary by Anas Aremeyaw Anas involving the minister.

It follows an exposé by journalist Anas Ameyaw Anas and his Tiger Eye PI which puts the Minister of State as a corrupt person after being said to have demanded to arrange a meeting for undercover agents to meet Vice President Bawumia unknown to him.

Charles Adu Boahen appointment was revoked by the President following the excerpts of the documentary which was made public by the journalist.

He was said to have suggested that one needed just USD200,000 as an appearance fee and some positions by an investor for his siblings to get his backing and influence in establishing a business in Ghana.

Ahead of his public viewing of the said documentary, Anas posted on his

Facebook timeline stating that when his Tiger Eye Pl team met with the Minister of State in charge of Finance in the United Arab Emirates, UAE, he stated, for the Vice President to avail

himself to the undercover investigators who posed as investors, he will need an appearance fee of only USD 200,000 and also support their investment.

A statement from the Jubilee House signed by Director of Communications, Eugene Arhin said “after being made aware of the allegations levelled against the Minister in the exposé, “Galamsey Economy”, the President spoke to Mr. Adu Boahen, after which he took the decision to terminate his appointment.”

According to the statement, the President has since referred the matter to the Special Prosecutor for further investigations.

He however had to thank him for his supposedly strong services to the government since his appointment in 2017 and wished him well in his future endeavours.

Previous One dead, 4 injured in police-youth clash at Kenyasi [Photos]
Next It took me 2 years to say yes to my husband – Diana Hamilton