Soldier Nabbed For Stealing GH₵23,000 Is An Imposter -GAF 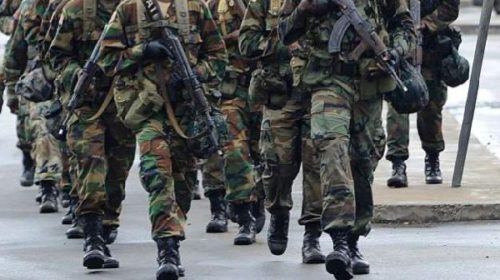 The Ghana Armed Forces (GAF) has debunked a report indicating that a Soldier (Private Asare Boateng) has been arrested for stealing GH₵ 23,000 belonging to a civilian.

In a presser, the GAF stated categorically that the suspect is an imposter.

“He is not a Soldier neither is he a Bandsman at the Signal Regiment or a Civilian Staff of the Ghana Armed Forces” it stated.

The statement also indicated that on Friday 16 September 2022, the Military Police in Takoradi arrested Asare Boateng dressed in a camouflage uniform, for posing as a Soldier and extorting monies from unsuspecting civilians at Elmina in the Central Region.

See also  Yaw Nsarkoh writes: Akufo-Addo became President and now we are utterly baffled at what we see

During interrogation, Asare Boateng confessed to engaging in impersonation and extortion.

The Military Police subsequently handed him over to the Kwasimintim Police Station at Takoradi for further action as required by law.

“GAF, therefore wishes to emphasise that the suspect (Asare Boateng) is not a Soldier and not affiliated to any Unit of the Ghana Armed Forces contrary to the reports in the media and therefore should not be regarded as such”.

In the same view, GAF also entreated the media to take advantage of its open door policy and to seek clarifications on such matters to avoid the publication of misleading reports that drags GAF into disrepute.

” GAF also wishes to assure the general public that it will continuously work with all stakeholders to weed out criminal elements in the society, including any uniformed personnel who engages in illegal activity so that the nation can have a secured environment for socio-economic development,” the statement said