Soldier nabbed for snatching Ghc23,000 from a civilian 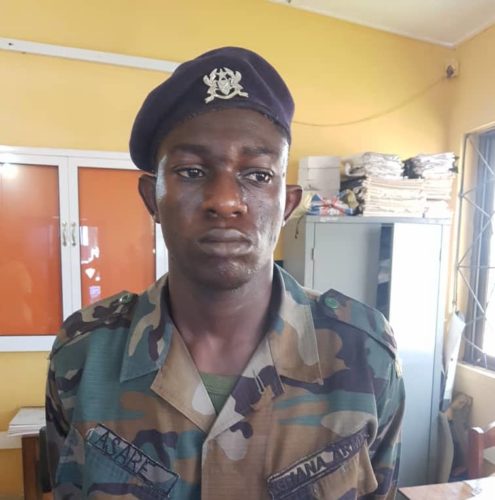 A bandsman with the 1st Signal Regiment in Accra is in the grips of the Ghana Police Service for forcefully snatching Ghc23,000 from a civilian.

According to police sitrep, Private Asare Boateng forcefully took an amount of Ghc23.000.00 from one Baba Musa at Elmina in the Central Region.

The embattled soldier is said to have asked Samuel Fyreson who was wearing camouflage-like trousers to take off the trousers but out of fear, Samuel took to his heel leaving the bag that contained the cash with his colleague Baba Musah.

See also  ‘Stop the Ghanaian female TV presenters from visiting the Black Stars, they ‘chop’ the players too much’ – Captain Smart to GFA

Private Asare Boateng is said to have forcefully taken the bag containing the money from Baba Musah and sped off in a Mitsubishi Pajaro vehicle with reg. number AC- 8957 -20.

Samuel Arthur Junior who had sent Baba Musah and Samuel Fyreson to deposit the money in his account with the GCB Bank in Elmina got wind of what had happened and therefore boarded a taxi to give the car a wild chase.

Fortunately for him, he tailed the car and found it In Takoradi and immediately called for the Military Police assistance.

Sergeant Soalihu and two other Military Police got the suspect arrested after a hot chase within Takoradi township. He was eventually arrested at Paa Grant roundabout.

An amount of Ten thousand Ghana cedis (Ghc10,000.00) was retrieved from the suspect Asare Boateng, after he admitted that he collected a blue polythene bag containing the said amount of money from the victim Mr. Baba Musah, but insisted that, the money retrieved was the exact amount he collected from him.

After further interrogation, he confessed that he was not a soldier, but a bandsman at the 1st Signal Regiment in Accra.

He has since been handed over to the Kwesimintim Police together with the retrieved amount for further interrogation.

Tags 000 from a civilian Soldier nabbed for snatching Ghc23