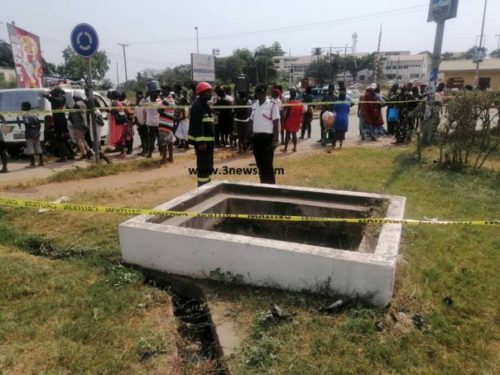 A five-month-old pregnant lady and a mother of three has met her untimely death after slipping into a well at Sekondi in the Western Region of Ghana.

The middle-aged woman whose name has been given as Auntie Efua was at the well with her three children to fetch water for washing when the sad incident happened.

Eyewitnesses who spoke in an interview with the host of Connect FM’s Omanbapa morning show, Nhyiraba Paa Kwesi Simpson, indicated that the deceased is a fish monger at the Bosomwti Sam Fishing Harbour in Sekondi.

“She is our colleague at the harbour, [on Tuesday] she left with her kids to wash her clothes around the well but we did not hear from her again. Her children came back but she was nowhere to be found until we heard someone had died in the well. When we came, she was the one,” one of the eyewitnesses indicated.

Personnel from the Ghana National Fire Service and the National Disaster Management Organization (NADMO) reported to the scene on time to retrieve the lifeless body of the woman.

Mr. Patrick Ocran, an official from NADMO, indicated that bruises were detected around the body after it was retrieved.

“We received a call from some residents that someone had fallen in the well. We quickly mobilized our men and moved to the scene and with the assistance of some Fire Service Personnel, we were able to retrieve the body from the well. We found out that she was about five months pregnant and had three kinds as well. We have also gathered that she came around with her children to fetch water and she slipped into the well,” he indicated.

He added that his outfit has cordoned off the scene to avoid others from fetching the water.

“In the meantime, we have ordered for the well to be closed down. We are working to ensure it is safe for drinking before we allow people to come around again,” he added.