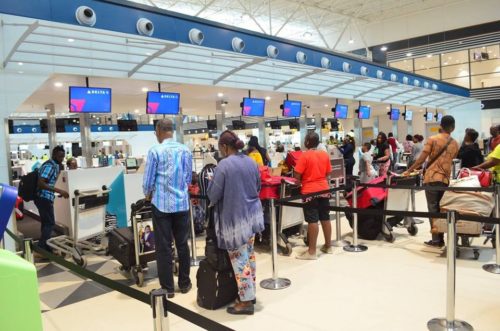 Officials of the Ghana Immigration Service at the Kotoka International Airport have been accused of serial extortion from Travellers ranging from Ghs300 to Ghs1000.

Foreign and Ghanaian travellers through Ghana’s flagship airport, especially first time Ghanaian travelers have revealed how the green uniformed officers drmand for bribes before allowing them to board.

In some cases, failure to pay the bribe could make the officer delay you until your flight takes off.

So institutionalized is the extortion and bribery that an immigration source told this portal officers manning the boarding gates and other “lucrative” points of the airport are required to “report sales” to their direct supervisors.

According to a traveller, in one case when he reported to a superior Immigration boss at the Airport, the boss asked that he pay what they were asking and depart.

No receipts were issued for these payments.

“Thank you senior for bringing up this issue bothering most Ghanaian youth. There isn’t job in the country and the person had managed to secure employment overseas and at the port of exit this immigration officers manage to take huge monies from them. My friend went to Qatar just last month he was asked to pay and he refused by asking them if the visa and ticket was fake a? They got mad by telling him he wanted to challenge them so he was to to wait. They want to delay him cos he wasn’t cooperating. He later then asked for the immigration office. Meeting with the director at the office and narrated his side of the story that the office had refused to let him go after he asked him for his immigration fee, he doesn’t know anything about. immigration fee so he decided to give him 200ghc. The director sent for the officer but came and denied asking for immigration fee but rather labourer certification from the labour office. The director asked how much does he have he should put down and go

So true , they took my brother $200 claiming that his COVID test results will expire before he gets Dubai so they let him go . After he paid them , they let him go and surprisingly all through his transit no other airport including never complained or ask him anything..  everyone avoid Kenya airlines, they are very corrupt