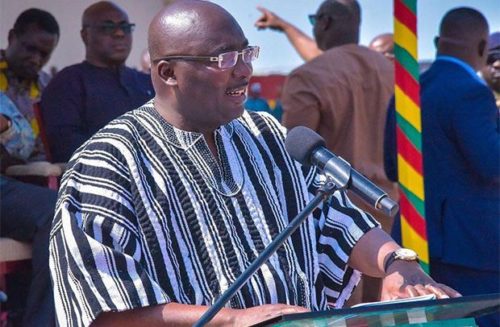 According to him, the creation of the region by the Akufo-Addo led administration was the strongest indication that the growth and development of the region was at the heart of government.

As one of the newly created regions, several projects including the construction of roads, health facilities, water projects, infrastructure for state institutions amongst others, being at various levels of completion. “There is no district in Savannah that can demonstrate more projects by any other government in the fourth republic than the NPP government under Nana Akuo-Addo” he stated emphatically.

As part of his working visit to the region, Dr Mahamudu Bawumia indicated that all projects started in the region will be completed.

Speaking at the Kpembewura’s palace palace in Kpembe, he assured that he will take the necessary steps to see to the realisation of all projects that are underway.

“I want to let you know that we are not sleeping as far as the development challenges of Savannah and the Salaga area in particular are concerned. In me, you have a son who will follow up on all of these issues you have raised and you have other very strong children who are also here. I’m going to work with all my brothers and sisters so that we can deliver on the development for Salaga and Savannah,” Dr Bawumia told the Kpembewura.

The Vice President disclosed that the Kpembe Nursing Training College has been given the approval by Ministry of Health to run BSc in Nursing and BSc in Public Health and approval by The Ghana Tertiary Education Council should enable the courses to start next year.

Dr Bawumia added that the construction of the 71km Fufulso-Bunjai Road which was commenced after the creation of the region, is at 68% complete. When completed, the road will connect the East Gonja to the West Gonja areas without the need to go through Tamale and therefore cut travel time dramatically.