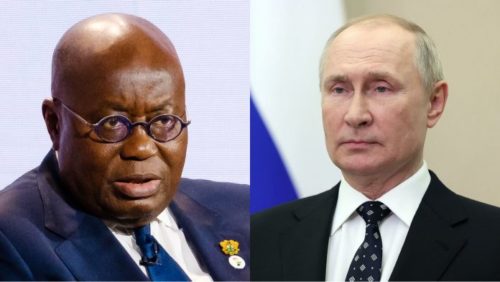 Following President Akufo-Addo’s accusations against the Russian government for keeping its mercenaries at Ghana’s borders with Burkina Faso, Moscow has accused Ghana’s President for taking bribes from IMF to make those statements.

The President mentioned the Russian government during his visit to Washington DC, alleging the Wagner group which is aligned to Moscow is on its border.

Akufo-Addo had called on the US government to intervene in the issue during his interaction with Secretary of State Anthony Blinken during the US-African Leaders’ summit.

“I think that beyond everything, there is a matter that I want to urge upon you. Today, Russian mercenaries are on our northern border. Burkina Faso has now entered into an arrangement to go along with Mali in employing the Wagner forces there.

“I believe a mine in southern Burkina has been allocated to them as a form of payment for their services.

See also  E-LEVY WILL EXPOSE EXECUTIVES, LEGISLATURE AND JUDICIARY TO THE WORLD ONE DAY - PRESIDENTIAL ASPIRANT

“Prime minister of Burkina Faso in the last 10 days has been in Moscow. And to have them operating on our northern border is particularly distressing for us in Ghana,” Akufo-Addo had said.

Even though no official reaction has come from Moscow, the Russian Embassy in Ghana has been tweeting on the issue.

The most recent being an opinion piece by one Michael Mahanta on the TFIGlobal news portal.

The December 19, 2022 piece titled ‘IMF literally bribes Ghana to turn it against Russia,’ draws a link between Ghana’s ongoing negotiations with the IMF for a bailout as motivation for Akufo-Addo’s comments.

“Now, the statements from Ghana against Russia’s Wagner forces at a time when it receives IMF assistance (that too, going back on its own promise), couldn’t have just been a coincidence.

“Burkina Faso’s Ministry of Foreign Affairs has also said that Ghana could have undertaken exchanges with the Burkinabe authorities on the security issue in order to have the right information,” it added.

He continued that, the economic turmoil confronting Ghana at the moment and her desperateness for a bailout is what has made President Akufo-Addo take sides with the west against Russia.

“Ghana under economic pressure has finally come under Western influence and there’s every possibility that Ghana is only talking the West’s language against Russia. The west has faced widespread criticism from governments and people of Western African countries and the anti-West sentiments are growing for sometime.

“West African countries that once had good diplomatic, economic and strategic ties with France, have dumped it as they have realised such partnerships have only created more crisis than solving in the region,” the opinion added.

In the immediate aftermath of Akufo-Addo’s comments, the embassy also posted two tweets, one of international relations expert Vladimir Antwi-Danso stating in a Joy FM interview that Ghana would have taken sides in the Russia-Ukraine war if it aligns with the US.

Burkina Faso recalled its ambassador to Ghana for consultations and also summoned Ghana’s ambassador in Ouagadougou for clarifications on the issues raised by Akufo-Addo.

Previous Petrol Prices Will Reduce Further – Napo Hints
Next Argentina gets record $42 million for winning World Cup; See how much every team got as prize money