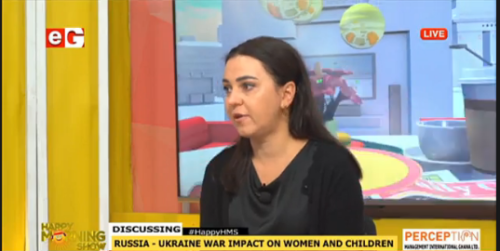 Head of the Human Rights Center, ZNINA (Ukraine), Tetiana Pechonchyk, has bemoaned the level of gender based violence suffered by the people of Ukraine, particularly women and children at the hands of Russia.

She described the war between Russia and Ukraine as especially painful for women and children.

“There is a lot of sexual based violence not only against women but children as well and this is largely hidden because victims don’t report these sexual abuses because it is difficult for them,” she submitted in an interview with Samuel Eshun on the Happy Morning Show.

However, several dozens of such cases have been reported and sadly, they include sexual violence against five (5) children from 4 years. Per recent head count, 400 children have died from the war, with 800 more wounded.

Most children are unable to attend school as hundreds of schools in Ukraine have been destroyed with the few operational ones having to house the students in bomb shelters whenever attack alarms go off. Aside from physical harm suffered by Ukrainians, the major fear is the psychological harm that will befall the children and generations yet to unborn.

With the war ongoing, Ukraine needs financial support to pay salaries and pensions as their economic growth has dropped a one third. The country largely requires military support to defend its territories and more importantly, sanctions to undermine the Russian war machine and prevent them from attacking Ukraine further.

Russia’s invasion of Ukraine constitutes the biggest threat to peace and security in Europe since the end of the Cold War.

On February 21, 2022, Russian president Vladimir Putin gave a bizarre and at times unhinged speech laying out a long list of grievances as justification for the “special military operation” announced the following day. While these grievances included the long-simmering dispute over the expansion of the North Atlantic Treaty Organization (NATO) and the shape of the post–Cold War security architecture in Europe, the speech centered on a much more fundamental issue: the legitimacy of Ukrainian identity and statehood themselves.

It reflected a worldview Putin had long expressed, emphasizing the deep-seated unity among the Eastern Slavs—Russians, Ukrainians, and Belarusians, who all trace their origins to the medieval Kyivan Rus commonwealth—and suggesting that the modern states of Russia, Ukraine, and Belarus should share a political destiny both today and in the future.

The corollary to that view is the claim that distinct Ukrainian and Belarusian identities are the product of foreign manipulation and that, today, the West is following in the footsteps of Russia’s imperial rivals in using Ukraine (and Belarus) as part of an “anti-Russia project.”