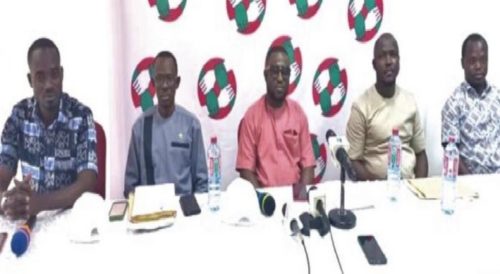 The Coalition of National Youth Organizers has described the budget presented by the Finance Minister, Ken Ofori-Atta, as imposed conditionalities from the International Monetary Fund (IMF).

The Coalition has, therefore, refused to acknowledge what Mr Ofori-Atta presented to Parliament as a budget meant for Ghana and called for the rejection of same.

“We rather see it as imposed conditionalities by the IMF which are not only harsh and  draconian to the already burdened and suffering Ghanaian but also inimical to the progress of the Ghanaian youth, especially, former NABCO trainees, unemployed graduates and all final year tertiary education students who have been told by the Akufo-Addo government that, there will be no jobs for them in the whole of 2023,” a statement issued by the Coalition’s General Secretary, Osei Kofi Acquah, said.

It expressed worry about the 2.5% VAT that has been introduced.

“We are also questioning why a government which supposedly wants to add value to our raw materials through its ‘One District One Factory’ flagship programme, will introduce an additional tax to discourage patronage.”

It also described as “unacceptable” the abolition of the GH¢100 daily threshold on mobile money transactions, explaining that sending even a GHp50 is going to attract a 1% Electronic Levy tax.

“How can you encourage the utilization of the interoperability platform which was created with the Tax payers, when you have such a policy of taking 1% of every electronic transaction?”

The Coalition strongly pointed out that the toll booth collection should have been re-introduced.

“The re-introduction of the illegally cancelled road toll could not only have generated revenue for government but could have also employed most of the wasting away able bodies who are youth.”

For various National Youth Organisers, the “IMF-imposed conditionalities” are going to breed more and more corruption, crime and a lot of vices especially among the youth.

“Again, it is going to create a lot of insecurity in this country.

“We daresay that the relevance of the much touted Free Senior High school and even attaining a tertiary education is becoming a waste of time, resources and a detraction of one’s future, since there is no assurance of job after school.”

They are, therefore, calling on Parliament as a matter of urgency to reject the budget since it is going to make the lives of their constituents unbearable.