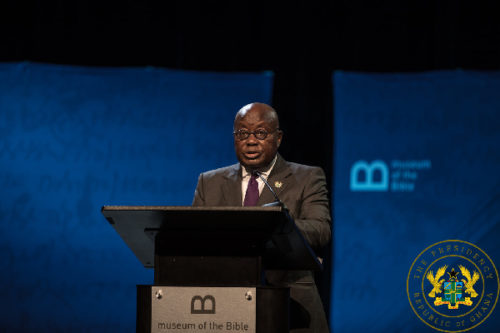 The Scheme is a youth development programme that seeks to challenge young people through a balanced programme of voluntary activities.

A non-competitive programme, the scheme helps unearth the potential of young people in diverse disciplines and allows their achievements to be recognized internationally. It is open to young persons from the age of 14 to 24 years regardless of their background and circumstances.

The President is the chief patron of the Scheme.

At the presentation ceremony at the Jubilee House, Accra President Akufo-Addo congratulated the gold award winners and called on the nation to offer them all the encouragement and support they required to grow to become responsible adults.

He urged the winners to put into use what they had learned over the last months to solve the problems of their respective communities.

The President noted that empowering the youth through social innovation and entrepreneurship had the “incredible potential” to solve problems at the grassroots level if the young people were given a robust platform to connect and act.

President Akufo-Addo emphasized that the development of Ghana demanded the active participation of the youth, saying, “for our young people to be in the position to drive this nation to where it ought to be, it is imperative that we equip, train and support and give them a level playing field.”

The President noted that though there was a gap in the skill set of young people, programmes such as the awards scheme creates the opportunity for young people to hone their skills, bridge their skills gap, and be all-around citizens.

President Akufo-Addo was excited about the award scheme’s global youth mobilization and digital award projects, which were enabling social entrepreneurship and putting youth in the driver’s seat to improve their own lives and societies

He said young people all over the world had contributed to economic growth and much more when they were equipped with skills, resources and the networks they needed to solve problems in their communities.

The President reiterated that his administration was a “firm believer in the infinite potential of young people, that is why the government interest in young people has been a priority over the past six years.”

He called on the youth to take advantage of the ‘You Start’ flagship programme which has set aside GHC10 million to support young Ghanaians who intend to start their own businesses or improve their existing businesses.

He gave the assurance that the government would continue to give the needed support to the youth “towards our collective development and sustenance.”