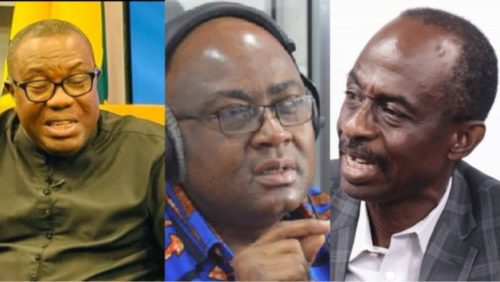 Journalist and pollster, Ben Ephson, has predicted a win for Samuel Ofosu Ampofo in the national chairmanship race of the National Democratic Congress (NDC).

The polls come off tomorrow at the Accra Sports Stadium with about 9,000 delegates expected from all the 16 regions.

Previewing the polls on Maakye Friday, December 16, 2022, Ben Ephson indicated the contest was close until Asiedu Nketia released an audio that sought to indict the leadership of Samuel Ofosu Ampofo.

According to the pollster, General Mosquito, as Asiedu Nketia is known, is possibly relegating his General Secretary portfolio for Chairman because of the party’s quest to elect an Akan as its flagbearer in 2028.

Explaining his stance, Mr. Ephson indicated further that, the delegates per Asiedu Nketia’s deeds have lost trust in him should he be elected as their leader since he is likely to expose other secrets at his advantage over that of the party.

“It was a close call until Asiedu Nketia brought in the tape. That audio has rather affected him. It will mar his chances” adding that “Asiedu Nketia wants to become party chairman because he has heard the party will choose an Akan flagbearer in 2028.”

Accessing the chances of Mr. Ofosu Ampofo, Ben Ephson said he has “done well in terms of working hard to bridge it [parliamentary seats] from 106 to 137. Whatever he did if he continues, we should expect a closer election in 2024.”

Clearly in campaigning, toes have been stepped on and the Council of Elders would have to work hard to mend fences,” he advised.