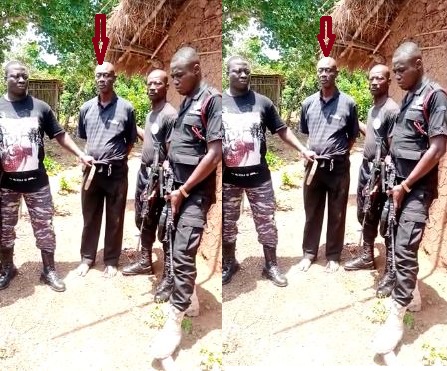 Police have arrested Nana Clark Onyaa, the Chief who allegedly conspired with a pastor and killed a 25-year-old student nurse, and buried her inside his (chief) Kitchen at Mankesim.

The Tufuhene of Ekumfi Akwakrom went into hiding after he got wind that his accomplice had been arrested.

Nana Clark Onyaa was however picked up at his girlfriend’s house at Ekumfi Akwakrom Hilltop.

Information gathered by Kasapa News Yaw Boagyan indicates that Nana Onyaa and the Pastor who doubles as the boyfriend of the sister of the deceased after kidnapping the lady first demanded Ghc15,000 from the family before the lady will be released.

The pastor was earlier arrested at Cape Coast after confessing the crime to the police after which the Police followed him to the Chief’s House.

The body was retrieved from the chief’s house where her bag, shoes, and other belongings were retrieved. The body has been deposited at the Cape Coast Teaching Hospital Mortuary for preservation and autopsy.

Previous More than 300 people killed, Over 100,000 displaced by floods
Next Akufo-Addo must resign over failed galamsey fight – CPP