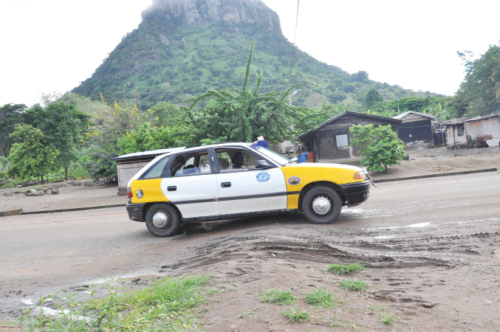 Disaster is looming on various portions of roads linking the Volta and Greater Accra regions.

The problem also persists within the Volta Region as a result of the incessant springing up of unauthorised speed humps in some of the communities.

Horrible humps are seen on portions of the Accra-Aflao Highway (N1), especially between Abor and Afife in the Akatsi District, where branches of fallen trees are strewn across the highway to compel

speeding vehicles to slow down.

The humps are mostly evident on the 66-kilometre Ho-Denu Road between the Akatsi North District and the Ketu North municipality where close to 20 such features can be counted between Kpeduhoe and Dzodze.

In the Adaklu District, about 38 of such humps can be counted on the road between Tsrefe and Ahunda towards Adidome.

The humps are within intervals of about 60 metres.

The impact of vehicles on the humps have resulted in trenches across the road.

The Volta Regional Commander of the Ghana National Fire Service (GNFS), Joy Ayim Ameyibor, told the Daily Graphic that the humps which were erected within short intervals posed extreme danger to vehicles, and also impeded rescue and emergency operations of the GNFS.

The Assistant Chief Fire Officer (ACFO) who was speaking during a tour of the road with the Daily Graphic, said the residents in the towns often erected the humps at night, making it even more dangerous for motorists who were not familiar with the road.

“The menace continued in spite of the protests and cautions regarding the dangerous humps on the international highway,’’ he said.

With regard to response to emergencies by the GNFS, ACFO Ameyibor said the humps compelled the fire engines to slow down irrespective of the fact that the slightest reduction in the response time could result in disasters on a large scale.

A close look at the humps revealed that they were made of gravel, logs, stones, clay and other crude materials.

ACFO Ameyibor cited an incident in a community near Kpeduhoe earlier this year in which a domestic fire rapidly spread to six other houses in the neighbourhood before personnel of the GNFS arrived at the scene because the fire engine was hindered by the many humps on the road.

He renewed his appeal to the local assemblies and the Ghana Highway Authority (GHA) to take prompt steps to ensure that the humps were cleared off the roads.

For some time now, users of the road have been complaining about the uneven nature of the road, which already have many potholes and depressions.

The Regional Director of GHA, Eric Odosu, said a team of engineers had inspected the road as a first step towards addressing the menace of humps.

He said about five speed humps had also cropped up on the 71km Denu-Sogakope road, part of the N1, “and we are working with the security agencies to deal with those who erected them and restore sanity on the road”.

Last Monday, Mr Odosu told the Daily Graphic that the GHA had requested the security agencies to arrest anyone who errected such unauthorised speed humps.

See also  OUR OPPONENT IS THE NDC AND NOT OURSELVES; SIR JOHN TO MEMBERS OF THE NEW PATRIOTIC PARTY

Some of the residents told the Daily Graphic that they erected the humps because they were terrified by the speed at which the vehicles moved on the road.

A woman at Tsrefe, who preferred to be called Akpene, recalled how a speeding taxi ran over her aunt two years ago.

She said the humps had brought some relief to members of the community, especially children.

A resident of Afife, who declined to provide his name, said there had been several fatal accidents along the portion close to the Eleme-Sovi Basic School in the past one year.

The source said the victims were often students and teachers of the school who were knocked down while crossing the road.

“Several appeals to the Akatsi North District Assembly to erect standard speed humps on the highway have fallen on deaf ears and that compelled some people in the communities along the road to erect their own speed humps,” he said. 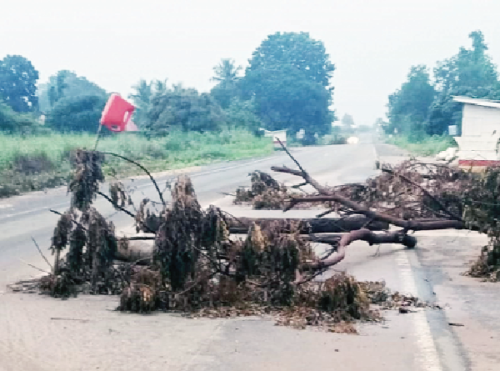 In an interview, the Director of Road Safety and Environment at the Ghana Highways Authority (GHA), Joseph Atsu Amedzake, said it was an offence for anyone apart from his outfit and other road agencies to construct speed humps, reports Emmanuel Ebo Hawkson.

Per Section 15 of the Ghana Highway Authority Act, 1997 (Act 540), anyone who excavates a trunk road or constructs an access road to a trunk road commits an offence and can be jailed for up to three months.

“If a community is having problems with the level of speed by drivers, it has to contact us to take appropriate measures but to go ahead and construct a speed hump is an offence and we will have no option but to bring such offenders to book,” Mr Amedzake said.

He added that the illegal speed humps would be demolished, while the GHA took steps to address the concerns of the communities.

On what informs the GHA in constructing speed humps, Mr Amedzake said the GHA normally took into consideration the level of speed of drivers and its potential to cause road crashes.

Mr Amedzake, however, said on trunk roads, there were speed limits given by the signposts, which if obeyed by drivers would save pedestrians and make speed humps unnecessary.

“Unfortunately, road users, especially motorists, disregard the road signs. This is what forces us to come up with other measures like speed humps. But if they were obeying the road signs, there will be no need for speed humps. It is indiscipline,” he added.

Mr Amedzake advised road users to be disciplined and abide by road signs, adding that “even pedestrians must cross the road at the approved intersections and not just anywhere. Indiscipline on the roads must stop,” the GHA Director of Road Safety and Environment, said.

Previous When Will you learn to appreciate bureaucracy and transparency to devoid from corrupt practices…….Prof Mandora fired TEIN-UEW Executives.
Next “32 Major Hospital Projects Ongoing In Ashanti Region” – Akufo-Addo