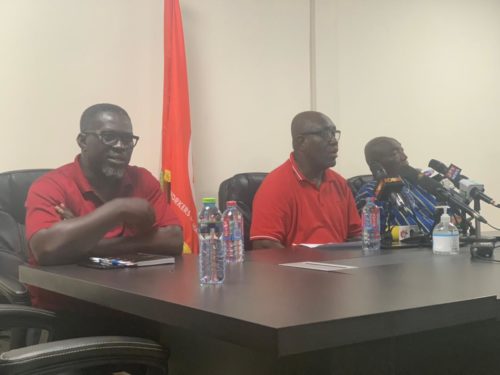 Organised labour has reached a deal with the government to exempt pension funds from the government’s domestic debt restructuring programme.

The Secretary General of the Trade Union Congress (TUC), Dr Yaw Baah who announced this at a press conference in Accra Thursday said the organisation has therefore called off it’s intended strike that was scheduled for December 27, 2022.

He said the agreement with the government follows meetings held between organised labour and government to resolve issues on the exemption to all pension funds in the domestic debt exchange programme that was announced on December 5.

“Government has decided to grant exemption to all pension funds in the DDE programme” he said.

However, the TUC Secretary General said the government, together with organised labour and associations shall work together to explore mutually beneficial options within debt sustainability limits and to also promote macroeconomic stability and economic recovery in the spirit of social partnership.

Dr Yaw Baah expressed the TUCs appreciation to the government for heeding to its call to safe pension funds.

Previous Worship and Thanksgiving Service to be held at National Cathedral site
Next Gold for Oil policy: Ghana expects to lift first oil products next month