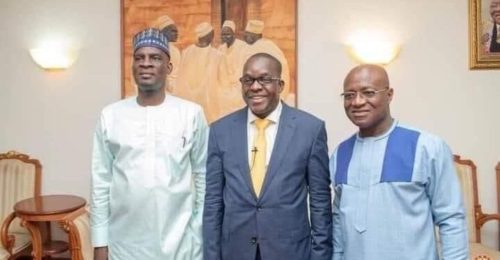 Parliament yesterday approved the Budget Statement and Economic Policy of Government for the 2023 fiscal year, after heated arguments from both sides of the House.

The approval comes after the Minority caucus expressed displeasure with parts of the Budget presented on November 24, 2022.

During the debate on the floor of Parliament, the Minority Leader, Haruna Iddrisu, argued his side’s hesitance to move forward with the budget approval.

“In this budget, the Minister of Finance is introducing 23 tax measures and a 2.5% VAT rate (increase). We the NDC minority group will fearlessly resist and fight the imposition of these additional taxes,” he said.

The Majority Leader, Osei Kyei-Mensah-Bonsu, countered the argument raised by his counterpart, and while he admitted that the country is not in a good shape, he said that revenue that will be raised from the VAT will go a long way to help address the situation.

“My colleague spoke about challenging the 2.5 % VAT rate. But as we all know, the economy is not in a good shape so the 2.5 % rise is primarily for road construction. If you do not want your road to be constructed, tell us,” he said.

After the heated debate, the Speaker of Parliament, Alban Bagbin, put the question of the Budget and Economic Policy presented by the Finance Minister.

After posing the question twice, Speaker concluded that the ‘ayes’ have it’, signaling the approval of the document by the House.

The Finance Minister, Ken Ofori-Atta, has proposed a budget that aims to narrow Ghana’s deficit, with spending cuts and new revenue-generating measures. It also includes a domestic debt restructuring programme, which was launched on Monday.

He has announced cost-cutting measures to be implemented next year. In Parliament on Wednesday, November 23, 2022, the Finance Minister said the government’s goal for the coming year is to significantly enhance revenues, significantly cut down the cost of running government, significantly expand local production, invest more to protect the poor and vulnerable, continue expanding access to good roads, education and health for every Ghanaian everywhere in Ghana and the diaspora.

Outlining the cost-cutting measures to the House, Mr Ofori-Atta said the government had directed Ministries, Departments and Agencies (MDAs), Metropolitan, Municipal and District Assemblies (MMDAs), and State-Owned-Enterprises (SOEs) to reduce fuel coupons, chit system allocations, amongst others, to government appointees by 50%.

“This directive applies to all methods of fuel allocation including coupons, electronic cards, chit system, and fuel depots. Accordingly, 50% of the previous years (2022) budget allocation for fuel shall be earmarked for official business pertaining to MDAs, MMDAs and SOEs,” he added.

He further announced a ban on the use of V8 and V6 vehicles by government officials effective January 2023, except for cross-country travels, as well as the limited budgetary allocation for the purchase of vehicles.

The Finance Minister announced that the government intends to spend a total amount of GHC205.4 billion in 2023, including the clearance of its arrears.

“Mr. Speaker, Total Expenditure (including clearance of Arrears) is projected at GH¢205,431 million (25.6% of GDP). This estimate shows a contraction of 0.3 percentage points of GDP in primary expenditures (commitment basis) compared to the projected outturn in 2022 and a demonstration of Government’s resolve to consolidate its public finances”, the Minister said.

Mr. Ofori-Atta explained that out of the amount, GH¢45 billion will be spent as compensation for employees, which represents 5.6% of Gross Domestic Product (GDP).

He said GH¢8.048 million will be expended on goods and services which will cover 1.0% of GDP, adding “Interest Payment is projected at GH¢53 billion representing 6.6%”.