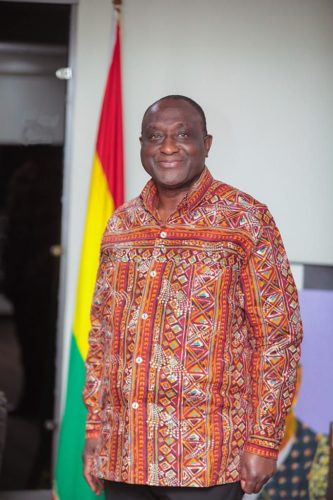 Former Member of Parliament for Manhyia North Hon. Collins Owusu Amamkwah has asserted that the teaming Grassroots delegates (made up of youth and women) within the New Patriotic Party (NPP) preferred Hon Alan Kyerematen to lead the party to the 2024 polls according to a survey he conducted.

The former Member of Parliament, who confirmed staging an extensive survey in five selected regions, revealed that at least 8 out of every 10 NPP grassroots delegates consulted preferred Hon Alan Kyerematen to lead the party to the 2024 showdown.

See also  WHEN YOU HAVE A HOPELESS FOLLOWERS, THE LEADERSHIP IS USELESS---MR.OPOKU WARE.

In an exclusive video interview on the possible successor to HE Nana Addo Danquah Akuffo Addo, Hon Collins Owusu analysed the details of his survey ahead of the make-or-break of Presidential Primaries.

According to the former Member of Parliament, the sample selected preferred named employment (improved standard of living) and a marketable candidate who could unite the party for victory in 2024 as the main motivation behind their choice of Alan.

See also  Stop the propaganda and tell Ghanaians the taxes you pay anytime you visit your family in Canada - Owusu Afriyie to Asiedu Nketia.

A number of research reports have been circulated by various researchers on the possible replacement for Nana Addo ahead of the 2024 main elections. Per the NPP Constitution, should the number of aspirants in the primaries exceed 5, a Super Delegates Election will take place to reduce the number to a maximum of 5. Election experts predict that the upper-class nature of the super delegates electoral college numbering about 1000 is being exploited by Bawumia to his as a stage but the Grassroots delegates numbering over 200,000 are rooting for Alan.

Previous An Open Letter to Justin Frimpong Kodua (JFK)
Next One dead, 4 injured in police-youth clash at Kenyasi [Photos]