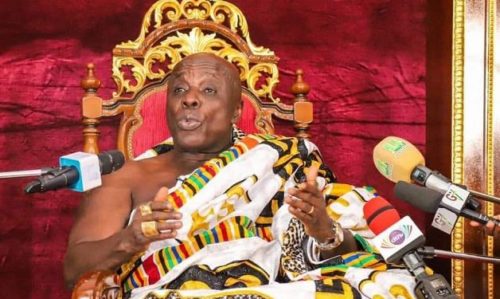 The Okyenhene, Osagyefuo Amoatia Ofori Panin II has called on Ghanaians to support the building of the National Cathedral project so President Nana Akufo-Addo is not embarrassed.

Addressing the Board of Trustees of the National Cathedral on Friday, the revered King urged them to do everything possible to ensure that the Cathedral is built to the glory of God.

“He [Akufo-Addo] has to glorify the name of the Lord for how far He has brought him and build the cathedral to testify that he is grateful to God for making him President. There is no sweeter news than this. With the cathedral, there’ll be no need to travel to Israel, just in Accra, the cathedral will answer all your questions about Jerusalem, Bethlehem, Nazareth and everything.

“So I’m pleading with you all, let us not bring shame upon our country and the President, let us contribute to building the cathedral,” he added.

The National Cathedral project has seen a lot of controversies, as many Ghanaians continue to question the prudence of the state financing an edifice that is said to be President Akufo-Addo’s personal pledge to God.

But President Nana Addo Dankwa Akufo-Addo has been unwavering in his resolve to build the National Cathedral in Ghana.

In the 2023 budget, some GH¢80 million has been allocated to fund the project despite the current economic crisis.

OccupyGhana, a pressure group, in a recent release recommended that the government suspends all public expenditures on the cathedral considering that the country is going through an economic crisis.

“Whatever arguments there might have been to support spending now-non-existent money on the proposed National Cathedral, have been eroded by the dire straits that the nation faces…our current situation makes the continued commitment in the budget to spend GHS80million on the cathedral, look like a vanity project”, it noted.