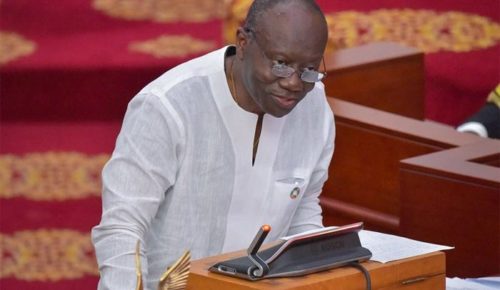 Majority Caucus in Parliament has intensified it demands against the Finance Minister, Ken Ofori-Atta demanding that he vacates his seat before the presentation of the 2023 budget statement.

According to the Caucus, it is not ready to see Ofori-Atta presenting the 2023 Budget statement to Parliament and should not be the one to lead the appropriation.

This is contrary to the caucus earlier stand after meeting President Nana Addo Dankwa Akufo-Addo.

The MPs, after a meeting with President Nana Addo Dankwa Akufo-Addo following their demand for the Dismissal of the two ministers T the finance ministry, lessen its stand and agreed for Ofori-Atta to present the budget and the appropriation and also conclude the deal with the International Monetary Fund (IMF).

However, the Majority has reverted to the original position it took when it demanded that the Minister of Finance Ken Ofori-Atta be dismissed because of the recent utterances of the minister.

Explaining reasons for their new stand at a press conference held on Thursday, November 10, the MP for Effiduase/Asokore, Dr. Nana Ayew Afriyie who represented the Majority said they think Ghanaians have lost confidence in the Finance Minister hence he must go.

He said his side demand that the Finance Minister vacates his position and should not be the one to present the 2023 budget.

“When people are hard-pressed and have no understanding to the logic of competence and hard work and when they are lose confidence, it affects the market and the pocket of people, it is the Finance Ministry. For us we have nothing personal against the Minister.”

He added that “our position is clear that if confidence in him has gone down he must go but that is not the same as demanded of the NDC.”

Dr. Ayew disclosed that the Majority Caucus has reverted to its original position and Ken Ofori-Atta must not be the one to present the 2023 Budget and the Appropriation.