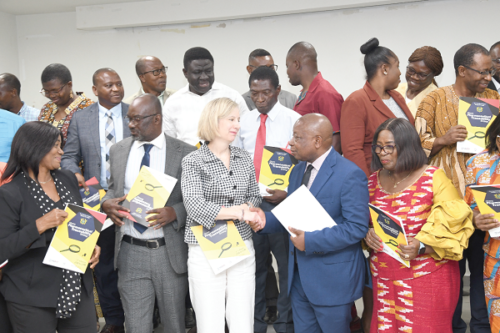 The Ministry of Health (MoH) has described as alarming the number of falsified, substandard and unregistered drugs in the country.

It said there was enough evidence and facts to support the position that the country had problems with fake and substandard medicines, as well as unregistered pharmaceutical products.

It said from the legitimate medicine supply chain, a brand of uterotonic, a category of medication used to prevent bleeding after mothers had delivered, was discovered to be substandard.

The Director of Pharmacy at the MoH, Dr Joycelyn Naa Korkoi Azeez, who disclosed this in Accra yesterday, said some of the cases of maternal mortality recorded in the country could be due to substandard uterotonics in circulation.

“Can you imagine a mother going into labour and unfortunately having issues of bleeding and the main drug that can be used to stop the bleeding is substandard? What this means is that you are going to lose the mother, even though the entire health team will be doing the right thing by prescribing the right uterotonics. But for the simple reason that the uterotonic is substandard, falsified or unregistered, it will make all efforts ineffective,” she said.

Dr Azeez was speaking at the launch of the Ghana Pharmaceutical Traceability Strategy and Document.

The strategy seeks to use electronic means to track and trace all medicines within the country’s legitimate supply chain.

It is expected that with the implementation of the strategy, Ghana’s medicine supply chain will be strengthened and empowered with tools and strategies to be able to trace and track medications from the manufacturer all the way to the end user.

The system will be used to ensure that all medications are authenticated, and where they are not authenticated, they will be tracked and traced by the system and taken out.
Quoting a recent report on uterotonics by the Food and Drugs Authority (FDA), Dr Azeez said uterotonics, used to prevent postpartum haemorrhage, were found to be substandard, without the appropriate active ingredients.

“The report also showed that unregistered uterotonics, such as oxytocin, were found in certain survey sites. This might have contributed to maternal mortality because of postpartum haemorrhage. Evidence also shows the prevalence of tampering with dates on medicines, packages, among others in order to extend their shelf life, without approval,” she said.
She said it was as part of the strategy to implement the Ghana medicine policy which was anchored on patient safety and ensuring quality standard in patient safety that they had come up with the strategy document.

The Director of Pharmacy said in developing the strategy, every stakeholder who mattered in the country’s medicine supply chain was involved, including the Pharmaceutical Manufacturers Association of Ghana, wholesalers, importers of medicines and the National Health Insurance Authority (NHIA).

On how the strategy would work, Dr Azeez said at the manufacturing level, information on everything about a drug would be stored and placed on every single product of that drug in a form of a sophisticated code which could be decoded using the right scanners.

With that, she said, pharmacists would be able to check whether a particular drug had been authenticated.

She explained that once the dispenser or the pharmacist was able to detect that the medication was fake, the strategy provided a system for him or her to report to the right authorities for action to be taken to recall the medication.

“Now that we have the strategy, we know what to do, we know our needs and we have quantified them. What we need now is money to train people, create awareness, buy the scanners and the bar codes and link every pharmacy shop with the wholesalers,” she said.

In his address, the Minister of Health, Kwaku Agyeman-Manu, said the same software was used to track product commodities during the COVID-19 pandemic.

For her part, the Mission Director of the United States Agency for International Development (USAID), Kimberly Rosen, said an accountable and transparent pharmaceutical traceability system guaranteed the safety of life-saving products from the point of manufacture all the way to the patient.

She urged the government to continue to prioritise its commitment to universal health coverage and also pay close attention to financial protection, so that no Ghanaian would slip into poverty due to catastrophic healthcare spending.

In a speech read on his behalf, the World Health Organisation Country Representative to Ghana, Dr Francis Kasolo, said traceability technologies offered the technical possibility to trace medical products along the supply chain, with a view to strengthening the near real-time monitoring of the integrity of a given pack of medicine.

He said there was global recognition that traceability systems could be leveraged as useful tools to ensure the integrity and improve efficiency of supply chains.

“They may not completely block falsified medical products from entering the supply chain but they will be implemented alongside other country specific systems, such as strict regulations, monitoring cold-chain shipping, facilitating supply chain visibility and providing a range of serialised mandates,” Dr Kasolo said.