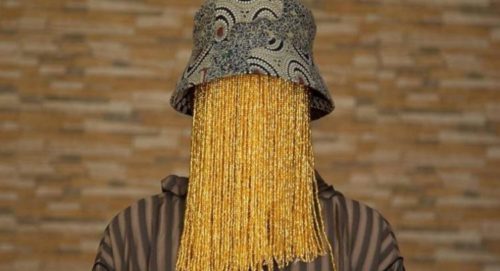 The Supreme Court has ordered ace investigative journalist, Anas Aremeyaw Anas to appear before it without mask to face former President of the Ghana Football Association (GFA), Kwesi Nyantakyi

The apex court in Ghana ruled on Tuesday morning that the reluctant undercover journalist must appear in court without face mask covering to testify in the case.

Anas Aremeyaw Anas who has been extremely reluctant to appear in court let alone without his mask, will now be publicly seen in court in his real flesh as he testifies in court.

This follows the decision of the Supreme Court to quash an earlier ruling by a High Court for Anas to testify in camera.

The journalist, whose investigation led to Nyantakyi resigning several football posts, claimed his life would be in danger if he testifies in court.

The order of the High Court 2, Criminal Division granted permission to Anas Aremeyaw Anas to testify in camera in the case against Kwesi Nyantakyi.

But on appeal by lawyers of Nyantakyi, the Supreme Court ruled in favour of the former football chief and asked Anas to appear in flesh to be cross-examined in open court by Nyantakyi.

Per the ruling of the highest court in the country, Anas Amereyaw must give evidence in open court without covering his face.

Kwesi Nyantakyi was implicated in the Number 12 exposè which Anas released in 2018 to name and shame some corrupt individuals in the football administration.

Mr. Nyantakyi has been fighting his case against the controversial journalist in a bid to clear his name after he was banned by the FIFA after the release of the investigative documentary by Anas.

Nyantakyi and other football officials from around the continent were secretly filmed by Tiger Eye PI team receiving cash gifts.