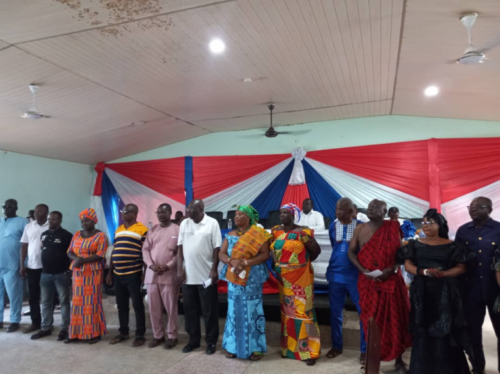 The New Patriotic Party(NPP) Constituency Chairman for Abura Asebu Kwamankese(AAK) in the Central Region, Mr. Obed Acquah Quansah has prophesied that the party will massively win the 2024 general elections to shame critics.

He strongly believes that ruling NPP will surely ‘Break the 8’ to make history in this country despite criticisms by opposition parties.

Mr. Acquah Quansah who known in politics as Chairman Obed charged all the NPP activists not to lose hope in the government but rather focus on the party winning in 2024 elections to break the eight years cycle.

Chairman Obed made this known when Central Regional NPP executives and executives of AAK led by Chairman Obed inaugurated 43 Council of elders, patron, disciplinary and finance committees respectively in accordance with the party’s constitution.

They also used the inauguration to launch AKK Constituency welfare schem to support party footsoilders who are in need as well as to support party activities without relying on both Regional and National executives.

The Central Regional Organizer of the NPP, Mr. Anthony Kwesi Sackey who gave brief talk on the political role of the members of the said committee urged the committee to ensure they served the party with a sense of dedication and honestly.

He explained that the various committee are expected to assist the party to better prepare for elections and meet the needs of Ghanaians.

Mr. Kwesi Sackey appealed to the finance committees to use their position to soliciting funds to make the scheme to be very successful “because breaking the eight is all about money”.

He appealed to all the 43 committee members to put the money into good use.

On her part, the Central Regional Women’s Organizer, Madam Charlotte Adwowa Antwi observed that low turnout in opposition National Democratic Congress(NDC) demonstration shows Ghanaians still have hope in NPP and observed NPP will set a record by breaking the eight.

She appealed to the party activists especially communicators to spread the government laudable initiatives to Ghanaians even at the funeral grounds to revive the spirit of NPP.

Previous Seth Terkper outlines what he will do to get Ghana’s economy on track
Next VIDEO: Cape Coast Assembly members go red; boycott sittings over bias